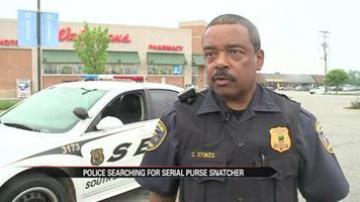 SOUTH BEND, Ind. -- South Bend Police are searching for a man who is robbing women at local grocery stores.

Police were called to the Martin’s Supermarket on Western Wednesday afternoon after a woman was injured when the suspect tried to steal her purse from the passenger seat of her car.

South Bend Police said it has happened four times in the past few weeks and they believe it is the same man in all of those cases.

“We’ve got a suspect that approaches unsuspecting women when they are getting their groceries. Once they get to their vehicles he actually attacks then. He pulls up right next to them, he literally goes inside their vehicles,” said South Bend Police Sergeant Charles Stokes.

But the suspect doesn’t always get away so easily. In two cases the women were injured when they fought back.

Police described the suspect as a white, middle aged man, thin, with salt and pepper hair and wears glasses.

They said he drives a white Chevy or Ranger extended cab truck.

Police said all women, even those shopping in the middle of the day, need to be on high alert.

“Women should be very concerned, because basically this guy is doing this in broad daylight. And he doesn’t care how many people are around. But he does make sure the parking lot is full because he hides his truck amongst other vehicles,” said Sergeant Stokes.

Anyone with information is asked to call police. Police have reason to believe the suspect may be robbing women in Mishawaka as well.