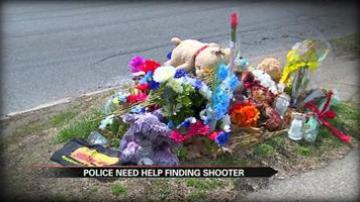 SOUTH BEND, Ind. -- Police are still searching for the person who killed Nathan Hall in the early morning hours of April 16. He was riding his bike to work when he was killed.

Police are still looking for his killer.

Hall was a high school senior and was killed on a school night.

His classmates are still struggling with the news.

"Me and Nathan grew up together basically," said sophomore Andre Butler.

Butler lives just a few houses down from Hall and walked the halls of Clay High School with his good friend every day.

"I ain't [sic] seen really nothing at school that has something to do with Nathan. They tried to put stuff on his locker but they made them take it off," said Butler.

According to Crime Stoppers, six tips have come in about Hall's murder. So far, none of those tips have led to an arrest.

Justin Caldwell was also friends with Hall. We asked him why someone would shoot and kill Hall.

"I don't know. That's what everyone was trying to figure out like why would somebody do something like that? He was just out riding his bike on a normal day type stuff and he just got popped out of nowhere," said Caldwell.

A memorial sits close to where Hall was killed. It includes teddy bears, candles and his McDonald's hat, where he once worked.

Butler says even if they catch the killer, it won't bring Hall back.

"I don't think I'll feel better matter of fact because it still happened. Even though they caught them. I mean it really don't matter- they still did it," said Butler.

If you have any information in this case, call Crime Stoppers at 574-288-STOP.

A prayer vigil will be held for Hall at 5:30 p.m. on Thursday at N. Adams and Elwood Avenue.