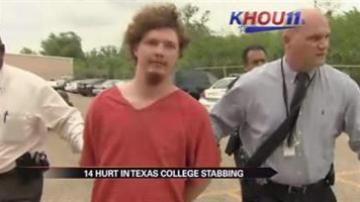 CYPRESS, Texas — The man accused of stabbing 12 people at a Texas college claims he had fantasized about stabbing people to death.

One student described the scene as gruesome.

"It looked like he was just bumping into him and stabbed his neck," said Cassie Foe. "He collapsed. I went and got napkins, rushed to cover the blood, try to keep all that I could in. I rushed to every class that I could, knocking on doors to see if I could help."

Investigators have charged Quick with three counts of aggravated assault with a deadly weapon.

Quick also told police that he had been planning the attack for some time.