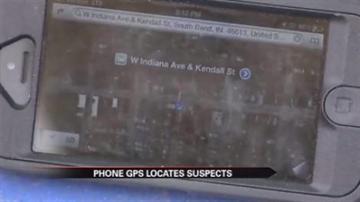 SOUTH BEND, Ind. – A man was robbed at gunpoint while sitting in his car in the 1800 block of East Calvert Street. Officers used the stolen phone’s GPS to locate the suspects, according to the South Bend Police Department.

Police say they received a call at 5:50 p.m. Tuesday about an armed robbery.

"Cops were all over the place all of a sudden and you know there's something up or wrong, you know, when you see something like that,” said Corwin Booker.

Booker, one of the owners of Calvert Muffler & Brake says he and his customers saw the aftermath of an armed robbery that occurred across the street at a store called Bargain Corner.

"The guy was just talking to the cops and I guess he got robbed,” said Booker who hopes the incident doesn't hurt his business.

South Bend Police say the victim, a 20-year-old man from Goshen, was sitting in his car on Calvert Street near Twyckenham Drive when the armed suspect demanded his cell phone and cash. Another suspect opened the victim's passenger door and sat in the front seat at the same time.

Captain Phil Trent, Spokesman for the South Bend Police Department, says the victim was confused and questioned them and that's when he says they both started assaulting the man by punching him in the head and that's when the gun went off.

"A shot was fired but it didn't hit anyone,” said Trent. “The two suspects fled the area."

But it was the victim’s iPhone that actually led police to the suspects.

The victim used an application to map the phone’s location using its GPS signal.

"A short while later, officers were given an area to converge on and they did and they found a vehicle that was suspicious in the area. As soon as they tried to approach the vehicle, it fled,” said Trent.

With the help of the GPS, the car was pulled over a minutes later.

Police say 20-year-old Vanessa Olivarez was driving. The passengers were the 2 armed robbery suspects- 18-year-old Dominique Sanders and a 14-year-old from South Bend.

"Inside the vehicle we found the cell phone and a handgun,” said Trent.

Sanders and the teenager are being held on preliminary charges.