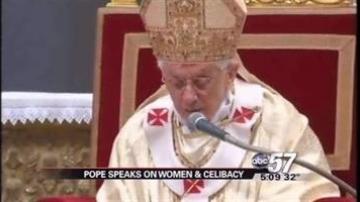 VATICAN CITY -- The head of the Catholic Church is shaking things up a bit.

The pope issued a rare and explicit denunciation of priests who question church teaching on celibacy and ordaining women.

He said they were being selfish in disobeying his authority. He made the criticism during his homily in St. Peter's Basilica Thursday.