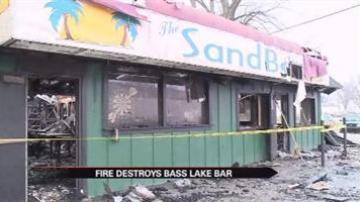 BASS LAKE, Ind. -- A popular bar in Starke County is no longer standing.

The Sandbar was a major part of the community for decades. It went up in flames early Sunday morning.

Fire officials say they got a call around 4:30 a.m. from someone who was driving by and saw smoke coming from the restaurant.

Investigators are still trying to figure out exactly what caused this fire.

It took five fire departments three hours to get the fire under control.

No one was harmed in the fire but the bar was completely destroyed.

Fire Chief Les Jensen of the Bass Lake Fire Department explained. "By the time I arrived on the scene, we had flames through the roof, the building is a total loss."

We were told there are plans to rebuild the bar from the ground up, starting as early as next week.