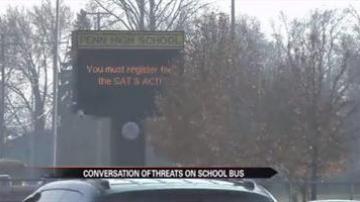 Parents at Penn High School were shocked to learn that a student may have had some very real intentions of harming students and staff at the school.

School officials were alerted of the possible threat Tuesday. It all started when students riding the bus home overheard some chilling comments made by another classmate.

"I find it extremely horrifying and frightening that that would go on at the school," said Barbara Gulbranson whose daughter is a freshman at the school.

The concerned students told their parents, who then contacted the school. Police say the school's resource officer followed up on the matter and visited the student's home.

That is when police say they found some alarming items in the student's room.

Police would not say what they found, but sources say police discovered homemade weapons and disturbing journal entries.

"I think they handled it well. They took action, but I think they should have communicated," said Gulbranson.

Parents at the school say they normally get an email or a letter from school officials, but this time they did not.

"I love Penn High School. I think it is a great school, but i think they should have communicated just to create an awareness for the parents and the families," said Gulbranson.

She says she would have liked the opportunity to talk to her daughter about it so she could address any concerns or questions the teen might have had. "I think it is something that everyone should talk about and discuss and what if she had some fears."

Police say the student has been suspended pending the results of a threat assessment at the Juvenile Justice Center.