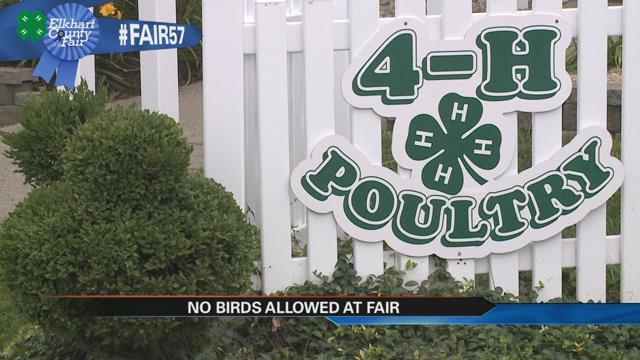 Poultry will be missing from this year's Elkhart County 4-H Fair because of the bird flu. Members of the 4-H Fair Poultry Club had to get creative.

More than 600 birds are missing from this year’s fair.

“Here in Indiana we did have a positive test of the H5 avian flu,” says Robert Kelly, Extension Educator for Purdue University.

Kelly says in late May a breakout of bird flu lead to poultry display cancellations because all it takes is one bird to do damage.

“It could potentially expose it to all 600 animals and then those birds go back to their house,” says Kelly.

And with plans for so many birds to be in the barn officials were not taking their chances.

Kelly says millions of birds have been killed by the flu.

Some are let down by the empty cages.

“Very disappointed kids but instead of looking at live birds they will be looking at processed birds,” says Perri.

Officials like Perri have had to get creative to make over 200 club kids happy.

“We’ve added a lot of educational things, a lot of fun activities so that they are here. They don’t have to clean the barn which they are happy about but they have a lot of other experiences,” says Perri.

Some of the other educational and entertaining events include a BBQ, how to cook with eggs, corn hole, and chicken flying contest with a stuffed animal and a catapult.