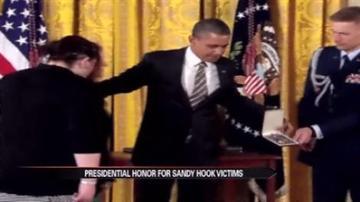 They gave their lives to save the children at Sandy Hook elementary and President Obama honored the adult victims of the deadly massacre.

The six women killed in the December shooting were honored with the 2012 Presidential Citizen's Medal. Their families were on hand to accept the awards at the White House.

President Obama said their bravery in their final moments was inspiring and more than worthy of such an honor.

"They had no idea that evil was about to strike," said President Obama. "When it did, they could have taken shelter by themselves. They could have focused on their on safety, on their own well being, but they didn't. They gave their lives to protect the precious children in their care."

Twelve other Americans were honored for their service and deeds as well. The Presidential Citizen's Medal is the country's second highest award for a citizen, after the Presidential Medal of Freedom.