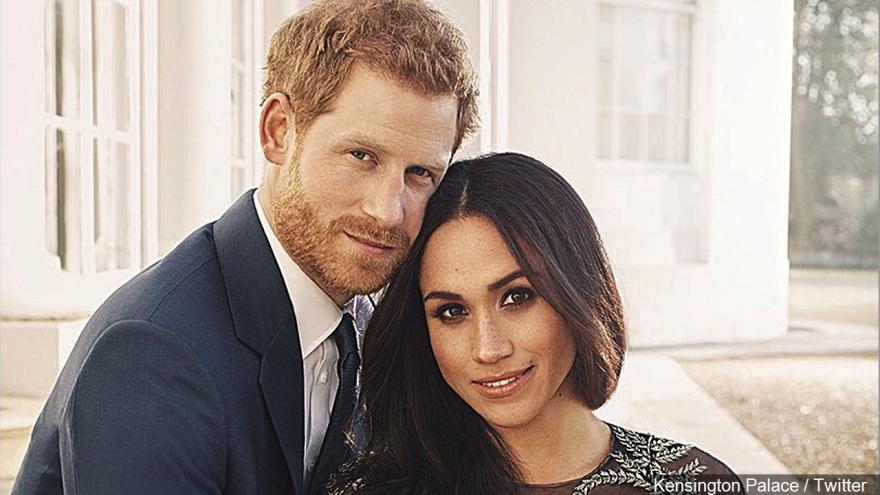 (CNN) -- If you're planning on attending the British royal wedding this spring, you can finally stake out a spot on the processional route.

Prince Harry and Meghan Markle's wedding will take place at 12 p.m. GMT (7 a.m. ET) on May 19, 2018, Kensington Palace announced Monday morning. The Palace had previously revealed the date of the wedding, but the timing of the ceremony hadn't been disclosed.

The British royal wedding, which will be held in St. George's Chapel at Windsor Castle, will be officiated by the Dean of Windsor, the Right Reverend David Conner and the Archbishop of Canterbury Justin Welby, said Kensington Palace, the royal residence where Harry lives.

The royal family has also just revealed the route of the procession set to take place following the ceremony, when the newlyweds first emerge as husband and wife.

The newlyweds will leave Windsor Castle in a carriage and travel along High Street through the town of Windsor, before returning to the castle by the Long Walk, according to the Palace. Windsor is some 40 km (25 miles) west of central London.

"They hope this short journey will provide an opportunity for more people to come together around Windsor and to enjoy the atmosphere of this special day," says a statement from Kensington Palace, the royal residence where Harry resides.

Following the procession, the couple and guests will attend a reception at St. George's Hall, prior to a private evening reception for friends and family hosted by Prince Charles, Harry's father.

St. George's Chapel has been the site of many royal weddings, although other members of Prince Harry's immediate family were wed in London. His father and mother, Prince Charles and Princess Diana, were married in 1981 at St. Paul's Cathedral, while his older brother, Prince William, wed Kate Middleton in 2011 at Westminster Abbey.

Prince Harry and Markle announced their engagement in November, when Harry told reporters he knew Markle, an American actress, was "the one" from "the very first time we met."

In an interview with the BBC, Markle said the couple first met in July 2016 on a blind date set up by a mutual friend. After a second date, the couple took a camping trip to Botswana, where they could finally be alone.

"We were able to really have so much time just to connect," Markle said, "and we never went longer than two weeks without seeing each other, even though we were obviously doing a long-distance relationship. We made it work."

Harry proposed on a "cozy night" in early November at Nottingham Cottage, Markle told the BBC, with an engagement ring he designed himself. It features a diamond from Botswana, flanked by two smaller diamonds from the jewelry collection of Princess Diana, Harry's mother.

He said he wanted to include the diamonds "to make sure she's with us on this crazy journey together."