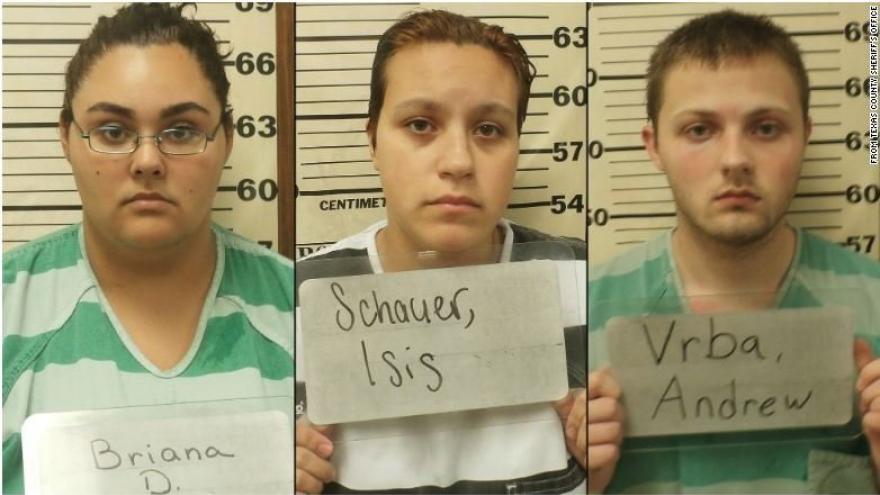 (CNN) -- The gruesome murder of a transgender teen in Missouri has some wondering why the three main suspects arrested aren't facing hate crime charges.

Texas County authorities have charged Andrew Vrba, Isis Schauer and Briana Calderas with the first-degree murder of 17-year-old Ally Lee Steinfeld, whose family had reported her missing earlier this month.

According to police reports, Vrba, 18, admitted to killing Steinfeld and burning her body.

All three are being held in jail without bond and have yet to be arraigned. Their lawyers did not immediately respond to CNN's requests for comment.

The grisly details of Steinfeld's death have prompted some to call for the suspects to face hate crime charges.

"There couldn't be a more vivid example of someone being targeted because of their gender identity than being stabbed in their genitals," said Dru Levasseur, director of the Transgender Rights Project for Lambda Legal, a nonprofit working organization for the civil rights of the LGBTQ community.

"I've heard complete outrage from trans people about how they (authorities) could not prosecute this" as a hate crime, Levasseur told CNN.

According to the Human Rights Campaign (HRC), which tracks violence against transgender people, Steinfeld is the 21st transgender person who has been killed in the United States in 2017.

"HRC is also deeply concerned about the investigation into her death," said HRC legal director Sarah Warbelow in a statement to CNN.

"As details of her brutal murder are confirmed, it seems likely that anti-transgender animus played a role," Warbelow said. "This broader epidemic of violence against the transgender community, often motivated by hatred, must come to an end."

Police have not released a motive for Steinfeld's murder, and the prosecution is not pursuing hate crime charges.

Steinfeld's family filed a missing person's report on September 14, though they hadn't heard from the teen since "approximately September 1," according to police reports obtained by CNN.

Police went to the Cabool, Missouri, trailer home of 24 -year-old Calderas after Steinfeld's family said Calderas, Vrba and Schauer, both 18, were the last people to be with the teen. The family had contacted the trio, the report says, but believed they were being lied to about Steinfeld's whereabouts.

Steinfeld's family, police and the suspects still refer to her by her name given at birth and use male pronouns, but her family says she referred to herself using female pronouns.

In an interview with detectives, Schauer denied knowing where Steinfeld was located, but said Steinfeld "had been in a physical altercation with Vrba on September 3, 2017." After the altercation, Schauer said, Steinfeld left and no one had seen her since.

But when police interviewed Vrba, he confessed to murdering the victim. "Vrba stated that he had to kill Steinfeld," the police report says, "and he planned to do so by poisoning him, but Steinfeld would not drink the poison so he used a knife instead."

While the details were left out of the police report, a Texas County deputy said Vrba described for police how he stabbed Steinfeld in the living room of Calderas' trailer, and told them that he, Schauer and Calderas took the body outside to burn it.

When investigators searched the property, the report says, they found human remains in a burn pile and a garbage bag by the chicken coop that contained "numerous human bones and burnt trash."

Calderas confessed to police she tried to help hide the body and told them where the murder weapon could be found.

Calderas and Schauer both told police Vrba had told them about gouging out Steinfeld's eyes and stabbing her in the genitals "multiple times, and that he had bragged about the murder and went into detail on how the murder took place."

All three are facing first degree murder charges, armed criminal action, and abandonment of a corpse. A fourth suspect, 25-year-old James Grigsby, is facing lesser charges for helping the others hide Steinfeld's body. His attorney also did not immediately respond to CNN's request for comment.

In a statement, Texas County prosecutor Parke Stevens Jr, defended the decision to not pursue hate crime charges by pointing out a first-degree murder charge carries the "highest and most severe form of punishment available in the State of Missouri."

In Missouri, hate crime charges cannot be added to a first-degree murder charge, only lesser charges like assault, harassment or property damage.

Since a first-degree murder charge is punishable by either death or life imprisonment, Jackson said, a hate crime charge cannot apply to a murder.

Additionally, it could complicate the job of prosecutors trying to convict defendants.

"A prosecutor generally does not have to prove motive," he said. "In hate crimes, you must. Therefore, they make the job harder of a prosecutor."

Jackson said of the prosecutor's decision, "It's the right call -- and only call, under the law."

But it shouldn't matter whether the hate crime charge wouldn't enhance the sentencing, Levasseur said. "Regardless of whether the choices are life in jail or execution, having a hate crime prosecution matters."

To him, it's about addressing the bigger question of why transgender people are so often targeted and the victims of violence.

"There's not enough attention being paid to this issue," Levasseur said.

"Its an opportunity for the state of Missouri to take a stand and say, 'Even though it wouldn't make a difference in terms of sentencing, we are going to implement this (hate crime) law because we recognize this is horrific and that transgender people exist,'" he said. "We need to be working on looking at the larger picture."