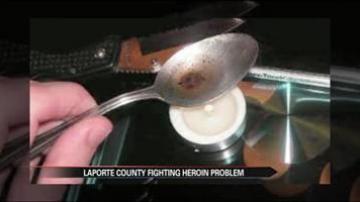 LAPORTE COUNTY, Ind. -- The LaPorte County Prosecutor wants to change the way overdose deaths are investigated because heroin is easily accessible and is claiming lives.

"We've been struggling with it for a long time here and this is kind of a depressed area now because of it," said Mark Buyers, LaPorte resident.

"I've had a few friends actually die of heroin overdose. One, she was a really sweet girl and so I saw it first-hand destroy her," said LaPorte resident Russel Brodhacker.

"It's tragic, it's sad, we've had how many deaths? And most these kids are under 25 years old," said Buyers.

LaPorte County Prosecutor Bob Szilagyi is trying to get to the root of the problem. He wants to bust the dealers.

He says currently, if someone overdoses, the death is treated like a suicide.

"Wait until the officer  gets there, secures the scene and we start photographing, start collecting," said Szilagyi. "If there's anything with fingerprints that can lead to who might have been there besides the deceased."

Residents say it is alarming to see how quickly this drug has taken over and are happy officials will be fighting the war on heroin with a new tactic.

"It shows they care. Anything is better than nothing. Why sit back and let these people kill themselves," said Buyers.