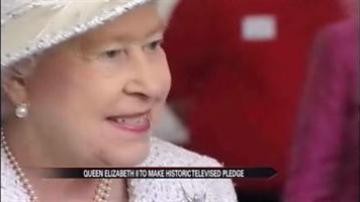 LONDON — Britain's Queen Elizabeth is set to make history as she takes a stand against discrimination.

She is expected to give a speech endorsing the new agreement among former members of the British Empire.

It opposes all forms of discrimination.

The Queen will also show support for new laws giving equal rights to boys and girls in royal succession.

So, if Prince William and Kate's baby is a girl, this means she will one day be  queen.