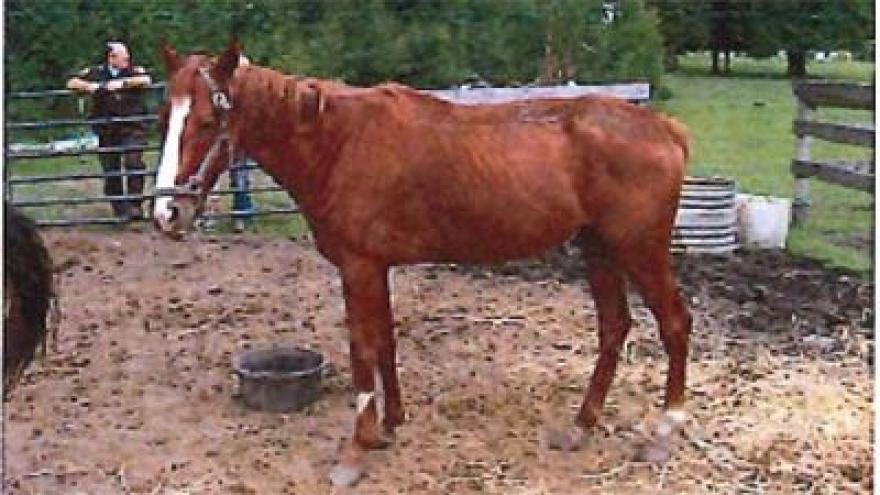 The Marshall County Prosecutor's Office has filed formal charges against Brian and Stacy Watts for 15 counts of animal neglect/cruelty for failing to properly care for horses on their property in Plymouth, Indiana.

From the road, several horses that were thin were in plain sight.

The deputy contacted Brian on the phone and he said he had several people looking after the horses while he and his wife were in Texas.

Watts granted the deputy and the state officials to go onto his property and check out the animals.

They noted while there was water available, it was not clean. And the hay that was available was very poor quality, according to court documents.

The animals were assessed based on the Henneke Body Condition Scoring System and the animals ranged from a 1 to 5 on the 9 point scale, according to court documents.

One of the horses was lying on the ground and appeared to have been there for some time, according to court documents. The horse was euthanized.

All of the horses were photographed and assessed. According to investigators, 16 of the 22 horses scored a 3.5 or below. (Scroll down for photos).

The deputy spoke with Brian again on August 29. He said he made a mistake in caring for the animals because he was having financial problems. He signed over the animals to the Marshall County Humane Society so they could be placed in other homes for rehabilitation.

As a result of the investigation, the veterinarian told police the majority of the horses were in very poor condition and have had poor quality feed for some length of time, according to court documents.

The veterinarian also told police the fact the horses were in large groups meant the more timid, younger horses wouldn't have access to feed when it was available, reports said.

The veterinarian told police it takes a substantial and extended period of time for a horse to deteriorate to the condition of the horses on the property, reports said.

The Watts had not been on the property for 7 days prior to the first visit on August 25, but had been under their care up until then.

The Watts were charged with 15 counts of cruelty to an animal for all of the horses with a Body Condition Score of 3 and below.

Horse 14 (not pictured) is a paint mare with 4 white socks, white on withers and neck. It was euthanized on August 28.