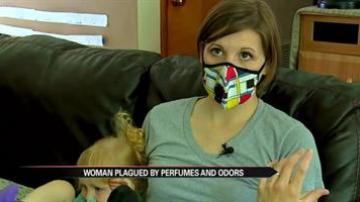 SOUTH BEND, Ind. -- Just a few days after ABC57 reported a student at Penn High School said he thought the school's air quality was having an adverse affect on his health, a woman came forward who says she was in a similar situation.

With the protection of a face mask, Carrie Bourgo plays "moo and baa" with her two children.

She had to wear the mask on the off-chance that reporter Meghan Schiller was wearing perfume.

"It's been within the last couple months where fragrances have started causing severe reactions and before that it was just a headache and a stomach ache and feeling very nauseous," said Carrie Bourgo.

A junior at Penn High School, Hicks said he feels ill every time he attends school.

His mask caught the attention of many viewers, some who accused hicks of making it up.

"I instantly was like 'this is very real' and I'm suffering with this and people don't believe me and I can't imagine being a kid and having that," said Bourgo.

"I was 14 or 15 years old and I started having these episodes of vertigo where all of a sudden the world was spinning or I felt like I was on a boat," said Bourgo.

Several years later she got a diagnosis - Mast Cell Activation Disorder. It causes a severe allergic reaction to even the most common things, like perfume.

"If I smell a fragrance it sort of slows my brain process down and I start slurring my words, I can't think, I can't really understand what you're saying to me," said Bourgo.

That's why she wants the Hicks family to realize they're not alone.

"I felt like I needed to at least tell the family that there is someone out there. If you want to contact me I can maybe give you a doctor that might help you," said Bourgo.

We put the two families in touch.

Bourgo's condition is not related to the air quality at Penn High School.

Two other parents of students at Penn High School contacted ABC57 saying they wanted to talk because they thought their children had symptoms similar to Cody Hicks.