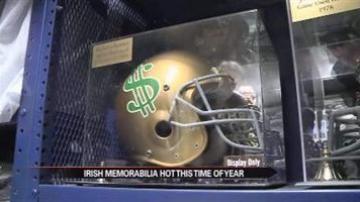 SOUTH BEND, Ind.-- "It's probably the tip of the iceberg of what's out there."

And his shop, Augie's Locker Room, proves it.

But before the days of collecting plane parts from the crash that killed Knute Rockne or the helmet Rocket Ismail wore on the cover of Sports Illustrated, Augustine was just a man with a hobby.

And a few tables of items he admired.

On gamedays, he would set up shop at the Logan Center for interested buyers.

After some success, he decided he had enough interest to open up his very own shop.

"Finally, I just said, 'This is a great idea, and I'm going to do this when I get out of teaching and open up a real store,'" Augustine said.

And with an undefeated Irish football team, business is going well.

"I'm living the dream," Augustine said. "I really am."

A dream, that was little more than just a weekend hobby six years ago.