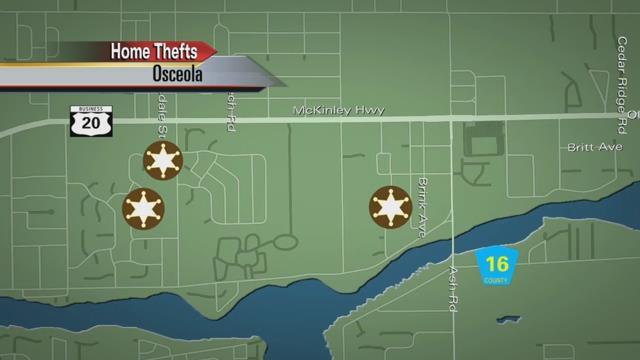 Four of those thefts, and one of those break ins, happened in the last two days.

On Sunday morning, there was a report of theft in the 11-hundred block of Birchtree Drive at 8:40 a.m.

Then about an hour later, homeowners just up the street on Raintree Drive, reported someone stole something from their property.

But the thief or thieves didn’t stop there! A few blocks west, on Brink Avenue, another theft was reported just before 11 o’clock.

And thirty minutes later, another theft was reported in the 10-thousand block of Elsie Avenue.

In addition to that, there was one report of breaking and entering on the 55-thousand block of Ringneck Drive at 9:07 p.m. on Saturday.

But, this crime spree began 10 days ago, on November 4th. That’s when a report was filed on the 13-hundred block of McKinley Highway.

That report was followed by a break in, about 5 miles away, on the 10-thousand block of Ashwood Forest Drive, just one day later before 8 a.m. And just a few hours and miles away, there was another report of theft, on Lincolnway East.

The next busy crime day was November 7th. There were two reports of breaking and entering, and two reports of theft, on McKinley Avenue, Vistula Road, Miller Avenue, and Birch Lane.