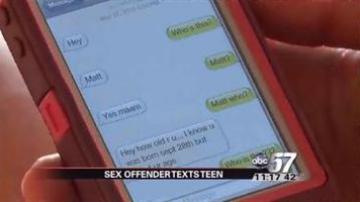 SOUTH BEND, Ind. -- Erin Bowerman said that on Tuesday her 16-year-old daughter was 'friended' on Facebook by a man who is a registered sex offender in Niles, Mich.

The family said the man used the social media site to send text messages to the girl's cell phone after finding the number listed on her page.

It started out like any other day at the Bowerman home. The 16-year-old teen, who did not want to be identified, was sitting on the couch watching TV when she suddenly got a text message from a strange number she did not recognize.

"At first I didn't think anything of it because I had just gotten a new phone and didn't have all of my friends' Numbers," she said. That soon changed and it was not long before she said something just did not seem right.

"He wouldn't tell me how he got my number, and kept saying he got it from my friends, naming people I didn't even know," she said.

When the man would not stop texting her, the teen immediately went to her mom and showed her the text messages -- sexual messages -- her mom, Erin Bowerman, said were very graphic.

"I was angry. I was angry it even happened," said Bowerman.

"I don't know what else he found out about her. Now do I have to worry every time she walks out of the house? What do I do next?"

Bowerman believes he found her daughter using Facebook, especially after he made references like this one in his text messages, "I know your birthday is September 28th, but I forgot your age?"

The girl's parents have already asked their daughter to take her phone number off of Facebook and change her privacy settings. Something their daughter said she was glad to do. She also said she won't friend anyone on Facebook she does not know.

Bowerman said she contacted the man after the text messages were sent to her daughter and said that he begged her not to call police.