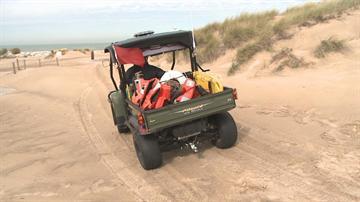 NEW BUFFALO, Mich. - The rescue search for a missing kayaker on Lake Michigan has been called off by the U.S. Coast Guard. The New Buffalo Police Department is now in recovery mode for the body of 18-year-old Mitchell Fajman of Channahon, Illinois.

Fajman and two others were kayaking in 10 to 14-foot waves on Lake Michigan when their boats capsized. Two of the three survived, but the third, Fajman, is presumed dead by authorities.

A minivan with a kayak rack, its owner still missing, is an eerie reminder of what happened here yesterday.

“I thought it was odd they were heading out this way it was so rough,” says Richard Lambert, a fisherman from New Buffalo. He saw the three Illinois kayakers yesterday from his boat trying to fight 10 to 14-foot waves in Lake Michigan. “It’s an awful mistake they made… an awful mistake,” says Lambert.

According to police at least two were teenagers and it wasn’t long before things got out of hand. “They had made a couple different attempts to get outside the channel. Once they cleared the breakwater it was just a short amount of time before they were capsized,” says Larry Pitchford, New Buffalo Police Chief.

Pitchford says for more than an hour the Coast Guard and police tried to save Fajman before they saw him slip under the waves.“Between the elements and exhaustion, (those) were the two things and he wasn’t able to make it,” he says.

After nearly 20 hours of searching the rescue crews only found the kayak, a lifejacket and a pair of shoes. “It’s unforgiving, it’s powerful (and) it moves ships and boulders. The human body just doesn’t stand a chance,” says Pitchford.

Lampbert says he’s seen this happen before in New Buffalo. “Respect that lake or it’ll be your tomb,” he says. Police say yesterday there were warnings about the conditions but the three faced the water anyways.

New Buffalo police will search the shoreline until Fajman's remains turn up. If conditions on the water calm down, divers will be searching for the body Monday.