Residents fighting to save Dowagiac landmark 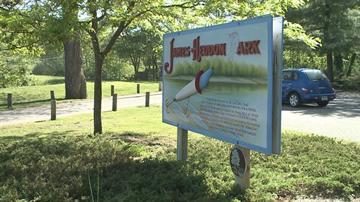 DOWAGIAC, Mich. – A piece of Dowagiac history is literally in danger drying up, the historic mill pond at James Heddon Mill Pond Park is facing trouble if money for upkeep of its dam isn’t found.

It was back in the late 1890s that James Heddon was sitting near the pond waiting for a friend and witling on piece of wood.  The story goes that when Heddon threw the piece of wood into the pond a bass grabbed it.  That was the inspiration for Heddon to start a company making fishing lures, he named his first model “The Dowagiac” and his company became world famous for its lures until it shut-down in 1985.

The pond where Heddon came up with his invention is currently the home of a city park and a hot spot for local fisherman.  The dam that created the pond is privately owned by the people who live along the shores of the pond and upkeep isn’t cheap.

“Every three years it’s over $1,500 for the dam inspection and then from that it varies from what we have to do in repairs,” explained Don Wolford, Interim President of the Mill Pond Improvement Association.  “If we can’t maintain this dam it’ll be taken out.”

The bill for repairs to the dam can be thousands of dollars and the cost of doing environmental work on the pond, such as removing weeds, can be as high as $40,000.  If the dam isn’t kept in good condition the state could remove it, which would destroy the mill pond.

“The state of Michigan would like to eliminate as many dams as possible,” Wolford explained.  “They’ll make them into trout streams.”

But the Mill Pond Improvement Association is fighting to keep the landmark around.  Member Rick Okonski put on a fishing tournament to raise money in 2011 and is planning an even bigger tournament in 2012 to help save the pond.

“It’s just a well known spot, it’s real important to me to maintain the integrity of the dam and the heritage,” Okonski described.  “Heddon’s been a part of my life since I was a little kid because my neighbor worked there and he gave me lures, so I started fishing and never been in trouble because I’ve always been on the water.”

This year’s tournament will be held on Saturday June 23.  Up to 40 teams of two fisherman of all skill levels can take part and the tournament includes contests for bluegill, crappie, bass and carp with $100 going to the winner in each category.  To enter fisherman pay $45 which goes toward the upkeep of the pond and the dam.  The grand prize is a Motorguide #40 Trolling Motor valued at $260.

Fisherman can enter the tournament by registering at Cranky Hank’s Bait Shop at 24992 Marcellus Highway in Dowagiac.