Rice has 'no recollection' of Clinton-Powell email conversation 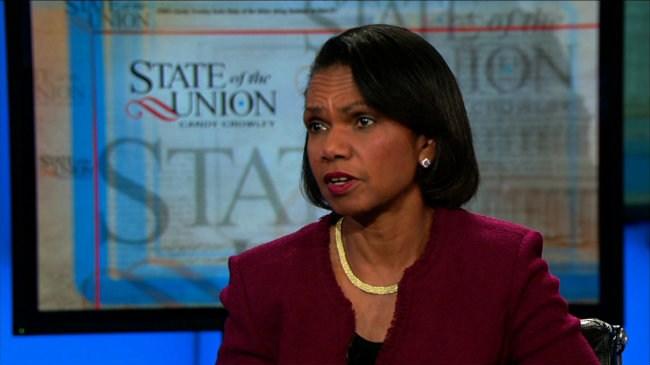 (CNN) -- Another former Secretary of State -- Condoleezza Rice -- has been drawn into the fray over who advised Hillary Clinton to use a private email server while she was America's top diplomat.

An aide to Rice told CNN that Rice has "no recollection" of a conversation between Hillary Clinton and Colin Powell that reportedly took place at a 2009 dinner party of former Secretaries of State, during which Powell allegedly recommended that Clinton use a private email account. The Daily Caller was first to report that Rice had commented on the issue.

Georgia Godfrey, Rice's chief of Staff at Stanford University where she teaches, also told the conservative news outlet that "Dr. Rice isn't doing any media right now. I can tell you, though, that she has no recollection of that conversation either."

It's unclear whether Rice was present specifically when Powell reportedly offered his advice, although it was reported she attended the dinner party.

The conversation between Clinton and Powell was first reported by The New York Times, based on an excerpt from an upcoming book about Bill Clinton's post-presidential years by Joe Conason.

According to the Times, Madeleine Albright hosted the dinner party with other former Secretaries of State -- including Powell and Rice and Henry Kissinger -- to celebrate Clinton's appointment to the top diplomatic post. Each former Secretary offered Clinton advice, and Powell's advice was reportedly to use a personal email account.

Powell, for his part, has also said he has "no recollection" of the reported dinner party conversation. He pushed back on the story over the weekend, saying that Clinton's "people are trying to pin it on me."

Neither Rice nor Powell has made a public presidential endorsement in the 2016 election cycle.

Following an investigation into the issue, FBI director James Comey recommended against any criminal charges to the Justice Department last month for Clinton over her use of a private email server while she was Secretary of State -- but Comey did characterize Clinton's behavior "extremely careless" in the handling of classified information.