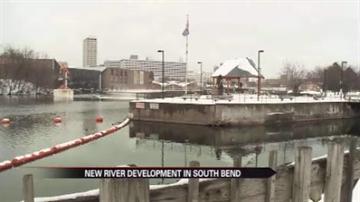 SOUTH BEND, Ind.-- Focus on one small area and do it well. That's developer Dave Matthews' game plan for the East Bank. An area he calls the next happening spot for young professionals.

"This is a great opportunity to make a space that's fun and attractive for young people and the young at heart as well," said Matthews, owner, Matthews LLC.

His $8 million plus plan will bring to life the building that already houses the Emporium restaurant, Studio C, BX Films, and other shops. The vacant spaces inside could wind up as offices, retail shops, or even a bar.

Just across the street, he's building ten townhomes. One of the first to move in: former governor Joe Kernan.

"We're about halfway sold out, but we do have some available so we can get somebody moved in within the next six weeks or so," said Matthews.

In another year, two apartment buildings will spring up. Ground floor retail with high-end apartments on floors two through five. Sort of like a mini-Eddy Street Commons.

"There's not a good 20 to 30 year old scene, so Eddy Street Commons, it's a lot of fun for a year or two, but by the time you hit 22 a lot of people kind of get bored with it," said Matthews.

So he's using the life already rooted in the area: a giant sycamore: the state tree of Indiana. Plus Howard Park and the serene sound of the river's waterfall.

"This is just part of that puzzle as we try to get South Bend thriving again," said Matthews. "We have to make space for great housing again that we have people throughout the day here."

He says the better shops, restaurants and bars will follow.