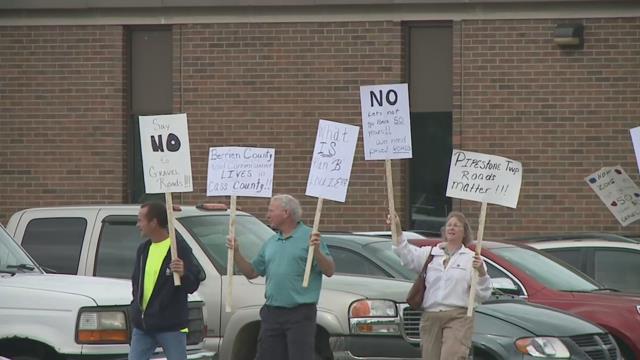 Two weeks ago, ABC57 reported the Berrien County Road Commission planned to turn about 45 miles of paved roads to gravel. After the report and opposition from residents, commissioners have decided to consider alternatives.

At the meeting, Louie Csokasy, the Director of the Berrien County Road Commission, acknowledged once again that the roads with standing water and bumpy potholes are dangerous.

“We are trying to be progressive. People think we bring this forward as a threat, it's not a threat. That reality is even as we sit out here today, we have failed roads,” said Csokasy.

Csokasy and the commission decided to halt the plan to convert paved roads to gravel roads.

Their decision received a round of applause.

“To give you an idea on an annual basis, to pay for salaries and wages and trucks and fuel and sand and salt and everything else, we receive $10 million. So $1.4 million to grind up and gravel these roads is a significant portion of our budget,” said Csokasy.

While it might be a win for property owners now, the board is only allocating six months for townships to come up with alternatives.

“They have decided to take it to the voters, and put some other monies in with it so I think as a whole we're doing the right thing,” said Harner.

Harner says her township already has an alternate solution in the works- a tax hike to pay for roads.

She says it will be on the ballot in November.