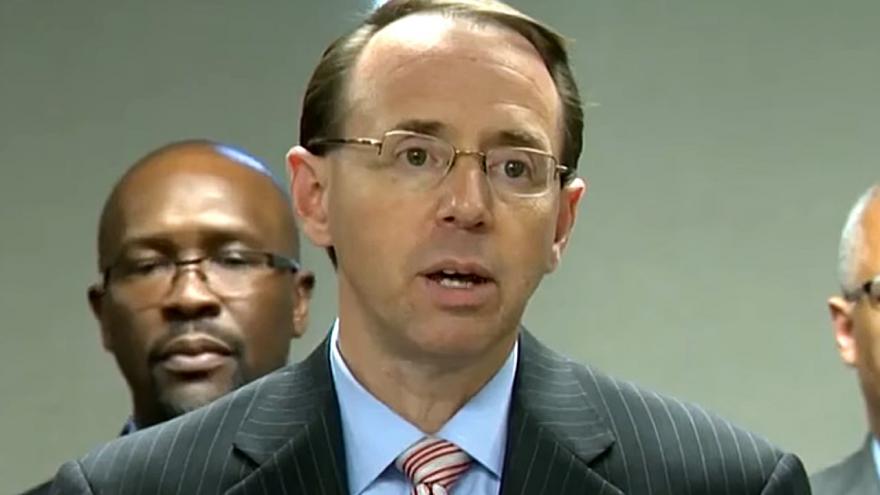 (CNN) -- Tensions are building inside the Justice Department as Deputy Attorney General Rod Rosenstein contemplates whether he will become a witness in the ongoing investigation into Russian meddling in the 2016 US elections.

Rosenstein, in office for less than two months, is the top Justice official overseeing the probe because Attorney General Jeff Sessions has recused himself.

But Rosenstein could end up recusing himself, too, Justice officials say, in part because he played a role in President Donald Trump's firing of FBI Director James Comey. The Comey dismissal could become part of a widening investigation into whether the President tried to interfere with the ongoing Russia probe.

Officials familiar with the matter describe friction on the Justice Department's fourth and fifth floors, home to the suite of offices belonging to the deputy attorney general and the attorney general, respectively, in part because of Rosenstein's handling of the Russia matter.

Rosenstein was among those who advised Sessions to recuse himself, according to officials briefed on the matter. Another official disputed that Rosenstein pushed for Sessions' recusal. But then Rosenstein made the surprise move to appoint Robert Mueller as special counsel to lead the Russia investigation, a development that people close to Sessions and Trump believe has worsened matters for everyone involved.

Sessions learned of the Mueller appointment at about the same time that the press was told, according to people briefed on the matter. The attorney general was at a White House meeting when the notification came from Rosenstein, prompting the enraged President to scold the attorney general for the turn of events. Trump had viewed Sessions' recusal as unnecessary, even though Justice Department regulations made it almost impossible to avoid.

The focus on Rosenstein sharpened Friday because the President attacked the deputy attorney general in a tweet, blaming him for what he terms a "witch hunt."

The President's tweet -- seeming to confirm the probe based on news reports -- came as a surprise to the President's own legal team, according to a person briefed on the matter.

Mueller continues to hire a team of lawyers, and with FBI investigators is gathering information that is widely expected to lead to a formal investigation into whether President Trump attempted to interfere in the investigation. Comey's firing likely will be part of that probe.

Rosenstein told the Associated Press earlier this month that when he hired Mueller he discussed the possibility of having recuse himself "if anything that I did winds up being relevant to his investigation" and if recusal is necessary.

The strain on Rosenstein has increasingly become visible in recent weeks, according to Justice officials.

At a ceremony last month to welcome Associate Attorney General Rachel Brand, the Justice Department's third-ranking official, Rosenstein joked awkwardly about being at the center of criticism since taking office, according to people who were in the room.

On Thursday night, he issued a statement lashing out at news stories sourced to anonymous officials and that he believes are causing the President and Republicans to attack the Justice Department, the FBI and Mueller for alleged leaks.

Rosenstein's unusual statement, which he issued over the objections of some advisers, said in part: "Americans should exercise caution before accepting as true any stories attributed to anonymous 'officials.'"

A Justice official said Rosenstein was motivated in part because of frustration that recent news stories have unfairly brought on a torrent of "leak" accusations against the FBI and Mueller's team.