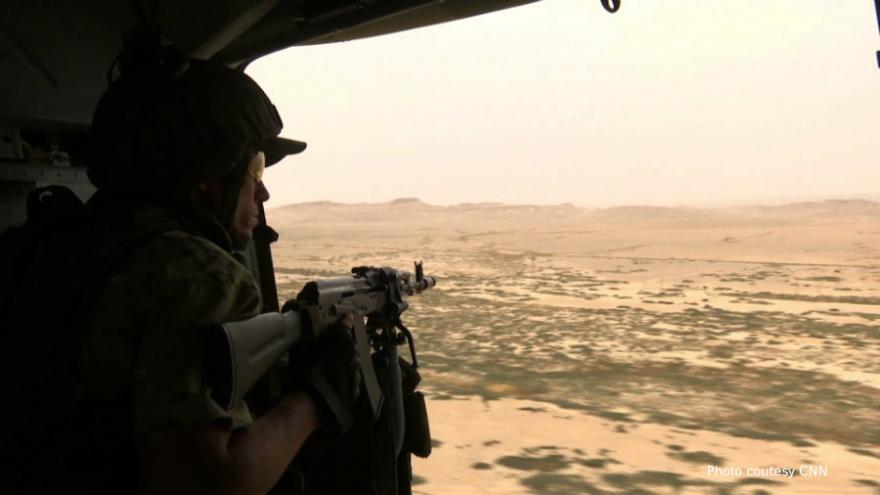 (CNN) -- A Russian strike wounded members of the US-backed Syrian Democratic Forces, the anti-ISIS coalition said Saturday. The strike occurred as both Russian and coalition forces converged on the former ISIS stronghold of Deir Ezzor.

"Russian munitions impacted a location known to the Russians to contain Syrian Democratic Forces and coalition advisers," Operation Inherent Resolve, the US-led coalition, said in a news release. "Several SDF fighters were wounded and received medical care as a result of the strike."

The strike occurred early Saturday, hitting an area east of the Euphrates River, near the city of Deir Ezzor.

An Operation Inherent Resolve official told CNN that the coalition denied a Russian military request to strike an area in the province of Deir Ezzor, as there were coalition advisers and US-backed Syrian forces there. But the Russians decided to carry out the strike anyway.

The source asked for his name to be withheld because of the sensitivity of the matter.

The extent of the injuries was not clear. No coalition forces were hurt, authorities said.

"The Russian Aerospace Force inflict pinpoint strikes only on targets, confirmed through multiple channels, in the districts controlled by IS," ministry spokesman Igor Konashenkov said.

He added that Russian command "notified in advance the US counterparts about borders of the military operation" in Deir Ezzor.

The Chairman of the US Joint Chiefs of Staff, Gen. Joseph Dunford, and Chief of General Staff of the Russian Armed Forces Gen. Valery Gerasimov spoke by telephone on Sunday, according to a US military official.

The phone call discussed the strike and the de-confliction phone line between the coalition and the Russians, the official said.

Both the US-led coalition and Russia are battling ISIS in Syria, but they are on two different sides of the country's civil war. The United States and its allies support some anti-government rebel groups in their fight to overthrow Syrian President Bashar al-Assad, while Russia backs his regime.

The fight for Deir Ezzor

Deir Ezzor has been a key base for ISIS since the group first captured a majority of the city back in 2014.

Pro-Assad regime forces, backed by Russian airstrikes, have recently made gains there and linked up with a group of beleaguered regime soldiers that were besieged there for nearly three years, according to Syria's state-owned news agency.

In support of this push, two Russian submarines launched a barrage of cruise missiles Thursday targeting ISIS positions in Deir Ezzor, according to a statement issued by the Russian Ministry of Defense.

But the SDF recently announced its own push toward the city, "Operation Jazeera Storm," and a group of its fighters have made rapid gains, capturing some 300 square kilometers (115 square miles) from ISIS along the Khabur River, which intersects with the Euphrates River just south of the city.

And the US-led coalition carried out its own airstrikes in Deir Ezzor Wednesday, targeting ISIS fighters and vehicles.

The two simultaneous offensives in the direction of the city raised the prospect of a clash over who would be able to claim the Deir Ezzor prize. But a spokesman for the US-led coalition told reporters Thursday that the SDF would not enter the city, seemingly ensuring that the Russian-backed pro-regime troops would be the ones to capture it.

"The plan right now is not to go into the city," US Army Col. Ryan Dillon, a spokesman for Operation Inherent Resolve, told reporters at the Pentagon via a teleconference from Baghdad.

But while Dillon acknowledged that the US-backed fighters would not go into the city, he said there were plenty of other ISIS targets farther down the river.

The regime and SDF advances are bringing the two forces into increasing proximity along the Euphrates, with Dillon saying Thursday that "increased" de-confliction was needed between Russia and the coalition as a result of the two sides being so close to one another.

"The convergence of military forces in this area calls for increased awareness and de-confliction," Dillon said.

De-confliction efforts were ramped up following a series of clashes several months ago between US-backed forces and forces allied to the regime which resulted in US warplanes downing two drones and a Syrian jet.

"Coalition officials are available and the de-confliction line with Russia is open 24 hours per day," said Coalition commander Lt. Gen. Paul E. Funk. "We put our full efforts into preventing unnecessary escalation among forces that share ISIS as our common enemy."

However, their communication appeared to have broken down Saturday.

The SDF also condemned the strike in a release.

"SDF are winning great victories against ISIS," the rebel group said. "As terrorism approaches its inevitable end, some parties are trying to create obstacles to the progress of our forces and try to vainly prolong the life of ISIS for goals and projects that do not serve the Syrian people."

It continued, "We condemn and strongly disapprove of this aggressive attack and call on the aggressors to stop these attacks, which serve only terrorists and terrorism."