RV industry employees reacts to State of the Union 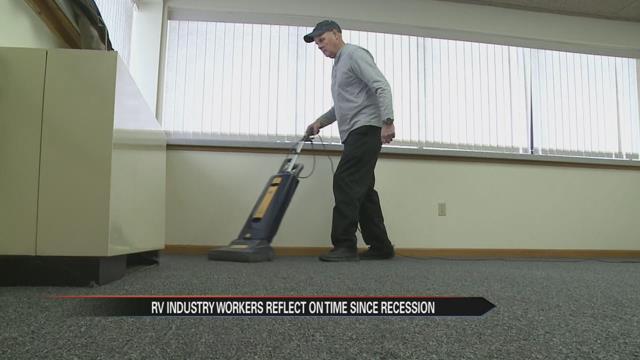 During his final state of the union address, President Obama said the country has experienced two years of steady job growth with more than 14 million new jobs added to the nation's economy.

In 2009 he visited Elkhart county making promises to revive the suffering RV industry.

On Wednesday those close to the industry reflected on the words President Obama made seven years ago.

“I’ve been a faithful worker all of my life there are very few jobs but I don’t understand why someone won’t hire a hard working man,” reads Ed Neufeldt.

Neufeldt is now 69 and reads a poem he wrote while unemployed in 2009.

Back then he had been let go from Monaco Coach.

While unemployed he introduced President Obama to a packed crowd at Concord High School.

He was in Elkhart to announce that grant money was going to be used for the company to start building battery powered electric vehicles.

“Well I thought he was really going to get the economy going again,” says Neufeldt.

Monaco ended up being bought out in 2013 and neufeldt did not return to the RV industry.

Another man close to the RV industry says the jobs are there. Micah Staley started his career in 2007.

“That was right before everything crashed and so I’ve only seen it go up from there,” says Staley who is General Manager at Grand Design RV Company.

Grand design is still fairly new but already has plans to bring up to 800 new jobs to the area.

“We feel confident where we are at and just recently invested in 50 acres across the street where we will be building two additional manufactures facilities just to keep up with demand,” says Staley.

While Neufeldt vacuums the office space he cleans, he thinks the President kept good on his word to Elkhart County.

A 3.5% unemployment rate compared to a high of 20% in 2009 makes him feel optimistic but not completely relieved.

“To look into the near future I doesn’t seem like things are going that well. Ya know with modern technology that’s taking away a lot of the jobs,” says Neufeldt.

Staley adds now is the busiest season for the RV industry. It is show season and Grand Design says they are off to a good start introducing a brand new line.