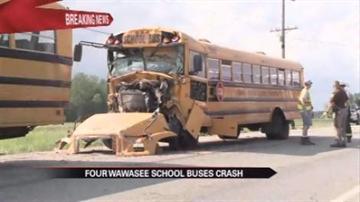 The Kosciusko County Sheriff’s Department has released the names of the four school bus drivers involved in the accident Wednesday afternoon near North Webster on State Road 13.

The third bus was driven by 47-year-old Julie Close.

The fourth bus and the one that sustained the most damage was driven by 61-year-old John R. Wagoner.

Close is also in fair condition with an unspecified leg injury.