Search and rescue dogs aid in search for missing man 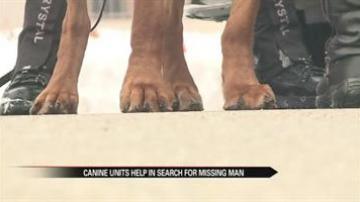 K-9’s from Michigan’s Search and Rescue took to the snowy fields of Grovertown where Isaiah Grounds was last seen.

Pam Burns is the President of Michigan Search and Rescue. Her dog Andor does a lot of the work.

“Our mission is to find missing people and recover the deceased,” says Burns.

Dogs like Andor are trained to find human remains.

Grounds has been missing for almost two weeks. His car was found with blood inside.

The Starke County Sheriff’s Department has asked for help from Cass County, Michigan and its K-9 Team.

Nellie, a one-year old bloodhound, is ranked among the nation’s best search and rescue dogs.

“We have a bloodhound out here that would track the scent of the area where we believe Isaiah might have walked,” says Cowen.

Grounds’ sister stood close by as the dogs and investigators did their work, waiting for any word of her missing brother.

“We have received a lot of tips, but obviously none of them have panned out to find Mr. Grounds,” says Cowen. “We certainly want to locate him to bring him back.”

The Starke County Sheriff’s Department confirmed with ABC 57 News that the bloodhound did trace Grounds’ steps from the scene of the accident to his home a few blocks away. They say it leads him to believe that Grounds is alive and in hiding.