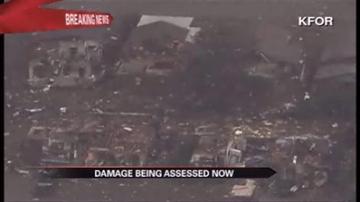 The National Weather Service says the tornado was at least an EF 4 with winds up to 200-miles an hour.

It caused a swath of destruction along a 20 mile path. About 300 homes were damaged or destroyed according to the Red Cross. Two schools and a Wal-Mart were also reduced to rubble.

Twenty-four deaths are confirmed and the search for survivors continues. Seven of the confirmed dead were from Plaza Towers Elementary.

At times, the tornado was two miles wide, destroying everything in its path.

The White House says Obama told the governor that he has directed the government and the Federal Emergency Management Agency to provide any assistance she needs.

FEMA has sent a special team to Oklahoma's emergency operations center to help out and dispatch resources.

The suburb of Moore was hit hard by a tornado in 1999. The storm had the highest winds ever recorded near the earth's surface.

If you would like to help those who have lost in Oklahoma's devastating tornadoes, the Red Cross is excepting donations here.