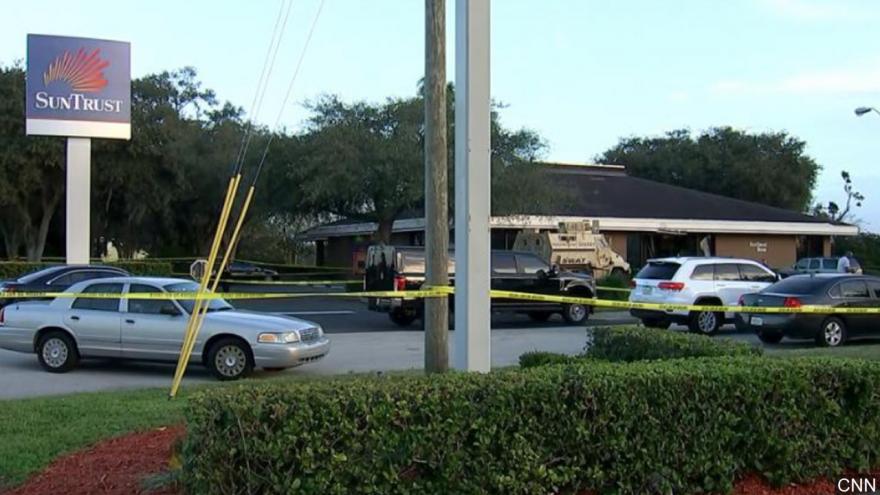 People lit flashlights and cell phones instead of candles to honor the victims because heavy rains in Sebring pushed the vigil to an indoor location. Florida Gov. Ron DeSantis had made earlier plans to attend but canceled, saying the weather had affected his travels.

Four SunTrust employees and a customer were killed in the bank's lobby Wednesday. After a standoff, police say, Zephen Xaver, 21, was arrested and is now facing five counts of premeditated murder. State Attorney Brian Haas has said it is likely that he will seek the death penalty.

Photos of four of the victims were framed together and stood on an easel among funeral wreaths and next to a banner that read "Sebring Strong."

Sebring police said families of two of the women are raising funds for funerals and other expenses.

One of the victims was Jessica Montague, 31, a mother of three young children and seven stepchildren. She was to have celebrated her husband's birthday the day of the shooting. Another victim was Ana Pinon-Williams, a mother of three and stepmother of four who had recently begun working at the bank and had been planning a family trip to her native Mexico.

"Let's use this opportunity, as our hearts are truly broken, and allow the light to shine in our lives," said Williams, a pastor.

The other two victims identified were Marisol Lopez, described by friends as a dedicated longtime bank teller. The customer who was shot dead was Cynthia Watson, who got married earlier this month. Authorities withheld the name of the fifth victim at the family's request in compliance with a new victims' rights law.

Police said the shooting appeared to be a random act, not part of a robbery, and that Xaver had no connection to any of the victims.

SunTrust spokesman Michael McCoy told media the bank has decided not to reopen the branch that came under attack after hearing from families. Instead, it is considering a different use for that space.

The banks had observed a moment of silence Friday at 12:36 p.m., which was the time on Wednesday when authorities say Xaver called 911 and told dispatchers he had shot everyone inside the bank.