Second suspect arrested in death of Andy the emu 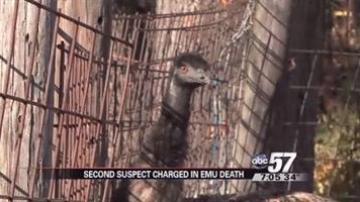 BUCHANAN. Mich.-- A second suspect has been arrested in the death of a local woman's pet emu.

Thomas Clark, of Galien, was charged last week with using a bat to kill Jean Wolf's pet emu on her farm, last October.

Clark is charged with a felony count of killing an animal and a misdemeanor charge of larceny.

In Michigan, killing an animal is a felony and is punishable by up to four years in prison.

There is also a fine, up to $5000 per animal. Jack Keldsen was arrested and charged with killing the bird last month.

Keldsen will be sentenced next Monday.