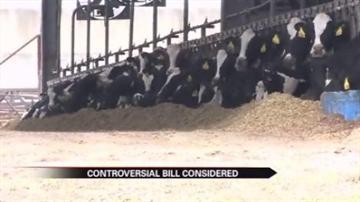 SOUTH BEND, Ind. – New legislation targeting what happens on Indiana farms could have a big impact on people all across the state. The bill would prevent people from taking pictures or video of farming and industrial operations from the inside.

Those who support the bill say, it will protect their livelihoods while those who oppose it say the bill would prevent people from exposing the truth.

For five generations, the Houin family has been a mainstay in local farming, but it wasn't always dairy.

"We went through the financial crisis of the 80's and growing the dairy seemed the most logical to try to help get us out of that situation,” said Floyd Houin, Homestead Dairy.

To keep that competitive edge, Houin says Senate Bill 373 would protect the proprietary techniques he uses on his farm.

"Everybody does things a little differently, and some are more successful than others,” said Houin.

"That is an interesting perspective and one that I had not thought of, so I appreciate you bringing that up. I don't think that was the intent of the bill,” said Shay.

Shay says the bill is nothing more than a gag on freedom of speech and people's ability to expose wrong-doing.

"There are some business owners that really put the humane conditions of the animals at the very bottom of the list,” said Shay.

Houin doesn't dispute that and points out that in every industry there are people who like to cut corners. But he also says that won't work for long.

"For us to get the best production from our animals we got to treat them most humanely,” said Houin.

Houin says there are third parties anyone can go to, to lodge a complaint.

"Once they get a complaint, they've got to come and check it out anyway,” said Houin.

Shay says without hard evidence, those complaints can be covered up and that the bill would prevent that evidence from being gathered.

"I just don't feel that any respectable business would have anything to worry about,” said Shay.

Shay points out that this law would not just apply to livestock, poultry, and swine farms that are prevalent in our areas.
It would prevent people from exposing puppy mills as well.

The bill goes before the Senate Corrections and Criminal Law Committee Tuesday afternoon.