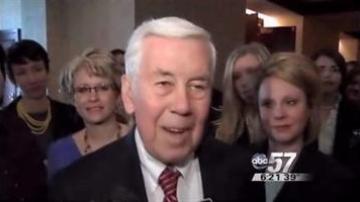 INDIANAPOLIS -- Senator Dick Lugar responded to accusations regarding his address.

Opponents claim he is not qualified to run for office in Indiana because he does not live here.

Luar said the address on his Indiana Driver's License is valid even though he sold that home 34 years ago.

He thinks voters are okay with the issue.

"We've had the issue for the whole time I've served in the Senate.  This is why I asked for a ruling early-on, when I was first elected, to make certain the residence situation was perfectly proper and correct," said Sen. Richard Lugar, (R) Indiana.

When asked where the BMV sends his mail, Lugar did not respond.