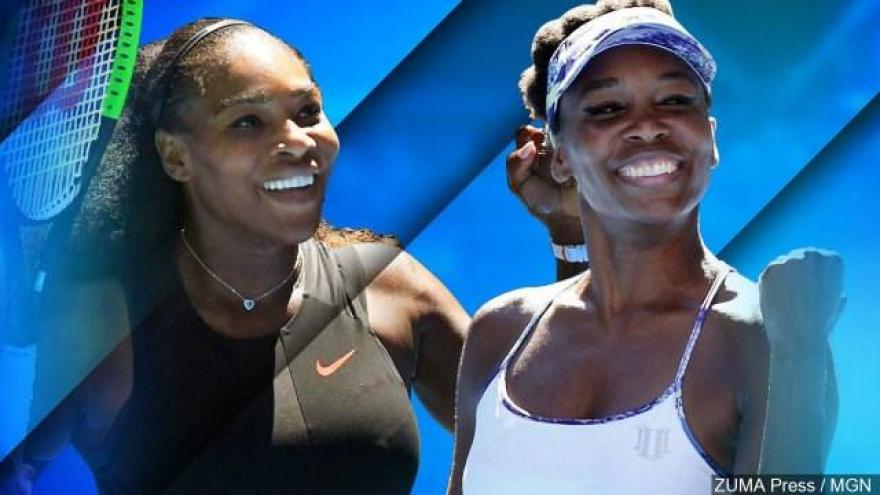 MELBOURNE (CNN) -- Serena Williams rewrote tennis history books once again, this time with sister Venus across the net and her fiance Alexis Ohanian watching from the stands.

When Serena beat her older sibling in the Australian Open final 6-4 6-4, she collected a 23rd grand slam title to surpass Steffi Graf for the Open Era lead.

Now she only trails all-time leader Margaret Court by one major and the way she played in Melbourne -- not dropping a set -- Serena, 35, is looking good to achieve that feat later in 2017.

As a considerable bonus Saturday evening, Serena also regained the No. 1 ranking from Angelique Kerber. Last year the German upset Serena Williams to win the title.

Serena had her game face on throughout, but the sisters exchanged an extended hug after Serena converted on her first match point in one hour, 22 minutes. The competitors in them took a backseat.

"Your win has always been my win," Venus told the crowd. "All the times I couldn't be there, didn't get there, you were there."

It simply wasn't meant to be for Venus, who appeared to be the crowd favorite at Rod Laver Arena.

At 36, she was the oldest Australian Open finalist in the Open Era. Her celebration after winning in the semifinals is sure to be one of tennis' memorable moments come the end of the long campaign.

Venus had last played in a grand slam final in 2009 at Wimbledon, when Serena once again came out on top. Her career has been slowed after she was diagnosed with autoimmune disorder Sjogren's Syndrome in 2011.

In keeping with their head-to-head record -- Serena now leads 17-11 and 7-2 in grand slam finals -- it was her kid sister who would have the final say in Melbourne.

The sisters have always been close but it was all business, especially from Serena, even before the match -- the oldest grand slam women's final in the Open Era in combined age -- began.

They didn't chat in the tunnel on the way to the court. Venus placed her arm around Serena for the habitual pre-match photo, but Serena kept both hands by her side.

She was clearly focused on the task at hand, perhaps fueled by the fact that in 2016, she lost two of her three grand slam finals. Very unusual.

This didn't turn out to be like their last duel at the US Open in 2015, which was one of the finest matches of the season.

At one stage Serena struck three double faults in one game, and Venus, sporting strapping on one leg, wasn't able to serve in the fashion she did in previous rounds.

Serena also received a warning for smashing her racket in the third game when a net-cord winner went against her.

She, however, earned the pivotal break of the first at 3-3 and broke again in the same game of the second. In that second set Serena's first serve -- which she said hadn't helped her out much of the tournament -- became more of a factor.

She ended up with 10 aces and an impressive 76% points won on first serve.

The crowd wanted a third set and when Venus won a 24-shot rally to get to 15-30 on the Serena serve at 5-4, it may have been coming. Venus though made a pair of unforced errors before Serena forced an error on match point.

She sunk to the ground, before the long embrace.

Later near the locker room Serena exchanged hugs with her team and fiance Ohanian, the Reddit founder. One wondered if parents Oracene Price and Richard Williams -- so instrumental in their daughters' careers -- watched back home in the US.

Their daughters were in another grand slam final, with Serena -- based on what happened in Melbourne -- playing some of her finest tennis.