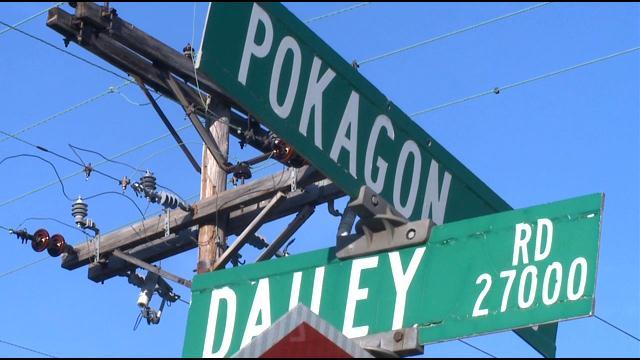 A bus and van collided at the corner of Pokagon Highway and Dailey Road.

People on the scene said this is not the first time that drivers have had problems at the intersection.

Police and nearby neighbors both say something needs to be done.

Police want residents to call the street commission to help make that intersection a four-way stop, because they say they have seen far too many accidents in that area.

“I am more than fed up! People have died out here,” said Clark.

She lives just hundreds of feet away from the chaotic corner and remembers what happened Thursday vividly.

“I was in my living room and I heard the crash, it shook my house, it was that big of a crash,” said Clark.

Police say the crash was between a van and a Cass County Transpo bus at the two-way stop.

Traffic on Pokagon Highway traveling east and west is not supposed to stop, but Dailey Road is a different story.

There is a stop sign there, and it is one that police believe a driver ignored.

“Two bodies had been ejected from the vehicle and in the roadway,” said Sweet.

One passenger was airlifted to South Bend Memorial and the others was taken to a local hospital.

Clark says a safer alternative would be to turn the intersection into a four-way stop, adding a stop sign to each direction of Pokagon Highway.

“If these were your children, you'd want something done with this light,” said Clark.
Share this article: