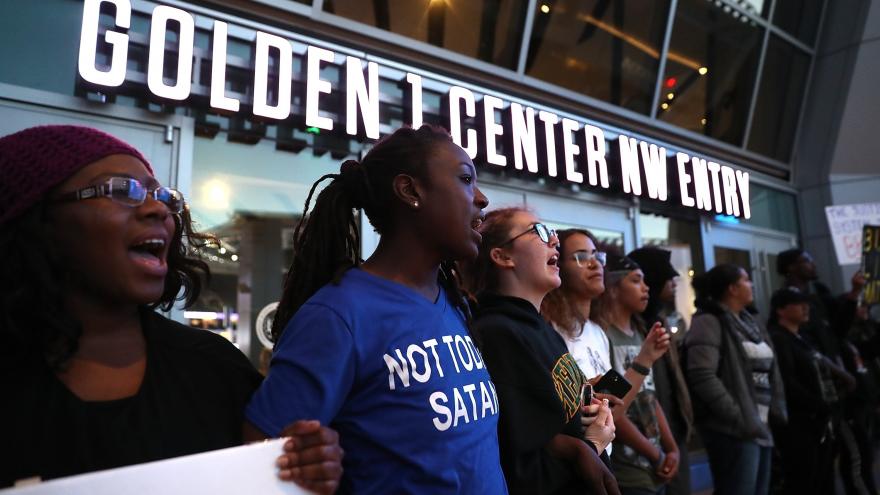 (CNN) -- The Rev. Al Sharpton vowed to press for justice as he delivered the eulogy Thursday for Stephon Clark, an unarmed African-American man shot dead by Sacramento police.

The sanctuary at Bayside of South Sacramento Church overflowed with people, so many sat outside as the funeral for the 22-year-old Clark took place.

"We will never let you forget the name of Stephon Clark until we get justice," Sharpton told mourners.

Sharpton spoke into the microphone while being hugged by Clark's brother Stevante, who had just interrupted the service with an emotional plea to never forget his brother.

Police fatally shot Stephon Clark in his grandmother's backyard on March 18, leading to days of protests. Police said they thought Clark had a gun, but only his cellphone was found at the scene.

In his eulogy, Sharpton disagreed with White House spokeswoman Sarah Sanders, who called Clark's shooting a "local matter" that should be left up to local authorities.

Sharpton pointed out that protests over Clark's death, which have included blocking highways and entrances to Sacramento Kings NBA games, have been peaceful.

After the funeral Sharpton told reporters: "We're here for the family to get justice and to get answers."

"The nation needs it," he said.

Benjamin Crump, an attorney representing the Clark family, said police "chose violence to stop the existence of Stephon Clark in this life."

"We know after this funeral the people are going to have passionate emotions, and we ask that everybody remain nonviolent," Crump said, referencing the 50th anniversary of the assassination of the Rev. Martin Luther King Jr.

He said police killed Clark "5 feet from where his grandmother sleeps every night."

The Sacramento Kings were preparing for more protests ahead of their game against the Indiana Pacers at 7 p.m. (10 p.m. ET).

Over the past week, the Kings have found themselves at the center of the conflict between police and outraged members of the community. Thursday's game includes "a significant police presence around the arena and through the plaza," the team said in a letter to fans and arena guests.

The team encouraged fans to arrive early and have their tickets ready.

Last week, Kings owner Vivek Ranadivé, conveyed sympathies for the Clark family. He was joined by the team's players, coaches and team executives.

During Sunday's game, the Kings and Boston Celtics wore warm-up shirts that said: "Accountability. We Are One" on the front and "#StephonClark" on the back.

The shooting took place after Sacramento officers responded to a report that a man had broken car windows and was hiding behind a home. Police said they pursued a man -- later identified as Clark -- who hopped a fence into his grandmother's property.

The officers, one of whom is black, have been placed on administrative leave during the investigation. Clark's family has disputed the police account.

Protesters have been gathering this week in front of the Sacramento County District Attorney's Office holding their cellphones in reference to the cellphone found near Clark's body.

They planned to hold another protest at the same location Thursday.

Protesters have spoken about other police shootings of African-Americans and their frustration over a legal system they say has failed to prosecute or convict the officers.

The chief said he requested the oversight of state prosecutors, even though he had confidence in his detectives to be impartial.

Police released footage of Clark's shooting 72 hours after it happened, and Hahn said authorities are still gathering facts and conducting a thorough investigation.

In the footage, someone can be heard telling officers to mute their body cameras. The comment comes about seven minutes after Clark was shot multiple times -- and it has not sat well with the community.

Hahn told CNN he doesn't know why the cameras were muted. Officers are allowed to do so in specific situations, like when they're talking to a confidential informant, he said.

"The bigger question, even beyond this specific case, is if we should allow people to mute their mics at all or under those circumstances," he said Tuesday. "We were already looking at that before this incident happened, but I think this incident is a perfect example of why that is problematic."

"Any time there is muting on this camera, it builds suspicion -- as it has in this case."

A Georgia college student has been missing since Valentine's Day

Today 29° Mix of sun and clouds