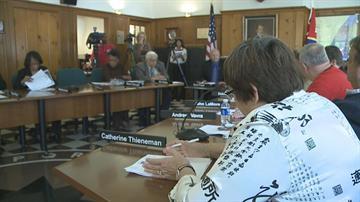 Opponents to cuts in the Berrien County Sheriff’s Department took the microphone, one by one, at the commission meeting in Saint Joseph. “I’m begging you to please not cut our county’s sheriff’s department anymore than it’s already cut,” said Bob Hess with Buchanan’s Neighborhood Watch program.

“Just put yourself in a victim’s place,” said another opponent, Laurie House. House’s sister was murdered in Galien in 2000. Two years of investigation were made before an arrest was made for the murder. “Luckily,” she said. “There was the manpower to do an excellent job.”

“That’s just one example,” said Sheriff Paul Bailey of the Galien murder. “of (all the things) we have to do each day.

Bailey told ABC 57 News that his department’s manpower would take a hit if cuts were made to the department. If the cuts were made that Berrien County is requesting, Bailey said seven officers would be eliminated. Bailey adds that 15 positions have been lost to budget cuts over the past six years.

Commissioners haven’t seen a proposed budget yet but the Sheriff’s Department has one of the largest in the county. “If there’s something non-essential to public safety, I know it’s hard to cut, but those would be the things we’d look at first.”

Property tax revenue has been stagnant for Berrien County. Each department was asked to keep the same budget in 2013 as was in 2012. Higher personnel costs account for cuts. The commission made it clear Thursday that a $1.3 million contingency fund could not be used to pay salaries.

Even one officer being eliminated is too much for House. “If there’s a home burglary and there’s not enough deputies and they have to leave to investigate a car accident or anything they have to leave without doing a thorough job,” she said.

Berrien County’s budget needs to be approved by the end of October.