Shots fired at Mishawaka bar for the second time 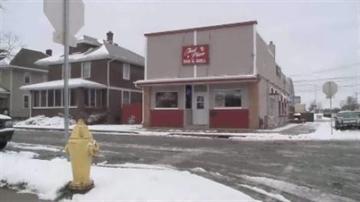 MISHAWAKA, Ind. -- Workers at a Mishawaka bar are cleaning up again after the building was shot up for the second time. Now they’re worried their customers could be hurt or killed the next time it happens.

Kimberly Cole is worried. Bullet holes are proof of a second shooting in six months at the Mishawaka bar where she works.

"You'd think they'd shoot something that people didn't go to,” said Cole, bartender at That Place.

That Place Bar and Grill on 6th Street has become the target of several high-powered B.B gun shots in the last year.

Earlier this week, someone fired four bullets into the windows minutes after the bar closed for the night.

"We're just trying to stay above water, and not have it, but this here is definitely going to hurt our pocketbook,” said owner Timothy Hann.

It's about more than just money. Hann is worried someone could be killed if this type of prank keeps happening.

"It scares me because of the safety of the people doing karaoke, and stuff like that in there,” said Hann.

Hann says each time the bar is vandalized, it gets a little worse and closer to operating hours.

"The poster saved the one side from coming all the way in,” said Hann.

"That's the scary thing. What window next!? Next time, that paper won't be there to save it,” said Cole.