Smoke spotted coming from Russian consulate ahead of facility closure 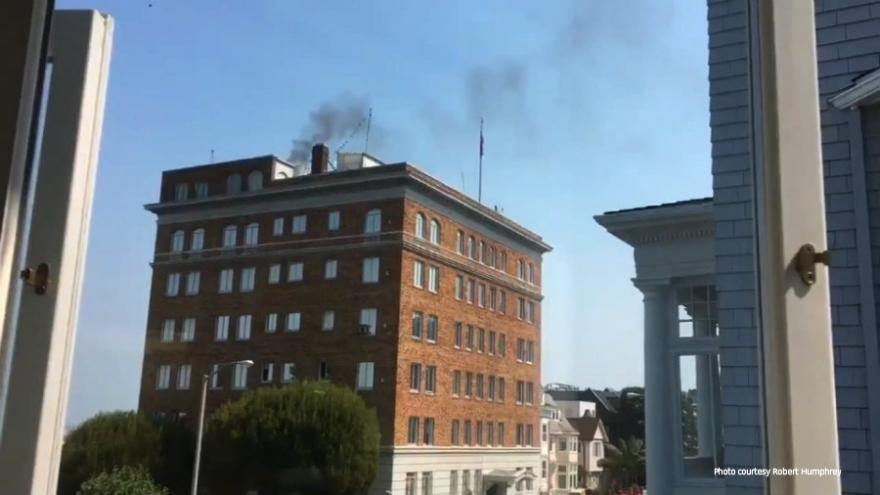 (CNN) -- Black smoke was seen Friday billowing from a chimney at the Russian consulate in San Francisco, a day before the US deadline for the Russian government to vacate the facility.

"No need to worry," a Russian official told CNN. "They are not electing a Pope."

Of the smoke, the San Francisco Fire Department tweeted: "The Russian embassy had a fire alarm NOT A FIRE everything is okay."

Responding late Friday to news reports about the "wisp of smoke," the Russian Foreign Ministry spokeswoman said "emergency conservation of the building" had been underway.

"Measures are being taken to preserve the building," Maria Zakharova wrote on Facebook. "Therefore the windows may be closed, the curtains may be lowered, the light may be turned off, the doors may be locked, garbage may be disposed of, heating devices may be switched off, life support systems switched on, and much more."

The source of the smoke, which emerged as San Francisco contends with a historic heat wave, prompted speculation on social media. California Rep. Jackie Speier, a Democrat, tweeted about the scene.

"If there ever was doubt that espionage was going on in the SF consulate, black smoke clears the air on the issue," she wrote Friday afternoon.

The State Department announced Thursday that it would require Russia to close the San Francisco Consulate General, as well as annexes in Washington and New York, in response to enforced staff cuts at the US mission in Russia.

"Russia will no longer be permitted to use these facilities for diplomatic, consular or residential purposes," a State Department official told CNN on Friday. "Public operations at the consulate in San Francisco must cease by September 2."

Zakharova in a separate statement earlier Friday said demands by "US secret services" to search the San Francisco Consulate General on Saturday, including the apartments of staff members and their families, "pose a direct threat to the security and safety of Russian citizens."

A US diplomat in Moscow was summoned midmorning Saturday to the Russian Foreign Ministry and handed a note of protest "in connection with the intention of the US authorities to search the Trade Representation of the Russian Federation in Washington," the agency posted on its website.

"The note stressed that we are considering a planned illegitimate search of diplomatic premises in Russia without the presence of Russian officials and a threat to crack the front door as an unprecedented, aggressive action that can also be used by the US special services to organize an anti-Russian provocation using planted compromising objects," the statement said.

"The US authorities must stop the gross violations of international law and breaching the immunity of Russia's diplomatic institutions. Otherwise, we reserve the right to reciprocate on mutual basis," the statement said.

CNN has reached out to US officials for comment about the latest Russian claims.

In her Friday statement, Zakharova said "unprecedented restrictive measures" by the US would deny visa, notary and other consular services to Russian and US nationals on the US West Coast.

"With these defiant moves, the US continues to worsen an already complicated bilateral climate and undermines opportunities for working together, including on solutions to urgent international issues," Zakharova said. "It is especially dismaying that these measures will hurt tens of thousands of ordinary people from both countries who are far from politics."

Russia reserves the right to take retaliatory action, Zakharova added, "as is customary in diplomatic affairs. This was not Russia's choice. It was imposed on us."

The abrupt facility closure is just the latest in a series of tense diplomatic moves among the two nations, following US allegations that Russia interfered in the 2016 US presidential election.

President Barack Obama in January ordered 35 Russian diplomats to leave the United States and two Russian compounds to be closed, prompting vows from Russian authorities that Moscow would respond in kind.

In July, the Russian Foreign Ministry ordered the United States to cut its diplomatic staff in Russia by nearly half and announced it would seize two US diplomatic properties in response to expanded sanctions passed by Congress.

"We believe this action was unwarranted and detrimental to the overall relationship between our countries," State Department spokeswoman Heather Nauert said in a statement about Russia's move.

The latest decision to close Russian outposts in the United States was made by US President Donald Trump, White House Press Secretary Sarah Huckabee Sanders said.