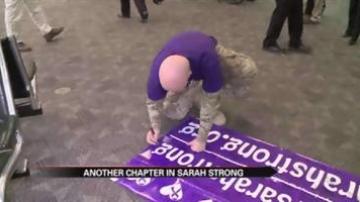 ELKHART, Ind.-- A local soldier came home from Afghanistan and became Sarah Strong. Sarah Crane is a 15 year old from Elkhart who is the youngest patient in the country fighting stage four colon cancer.

Brian Bittner landed in South Bend from Afghanistan surrounded by family and friends. Bittner heard about Sarah Crane on Facebook and wanted to support her.

Bittner said, “I actually saw it on Facebook through my newsfeed and I was trying to get a shirt to Kabul Afghanistan where I currently am. I was going to take a picture and post it to show her support around the world.”

Bittner is home on a short leave, but he plans on taking a Sarah Strong shirt with him back to Afghanistan.

“I saw it and was touched, and I just wanted to show support from across the world,” Bittner said.

Sarah Crane’s determination to beat colon cancer has captured the hearts of many across the nation.

Les Anderson's company has been producing the t-shirts, and he said the support for the Crane family has been phenomenal. He never thought they would make more than 5,000 shirts for Sarah Strong.

Anderson said, “People who don’t even know each other are saying we want to help out. We want a t-shirt. We want to do something!”

Signs of the Times' Tony Bliss said he made around 500 shirts today.

Bliss said, I’m blown away that I can be a little part of something so big.”

The Crane family is currently on vacation in St. Thomas which was made possible by the Make A Wish Foundation.

If you would like to make a donation you can do so at any Teacher's Credit Union.