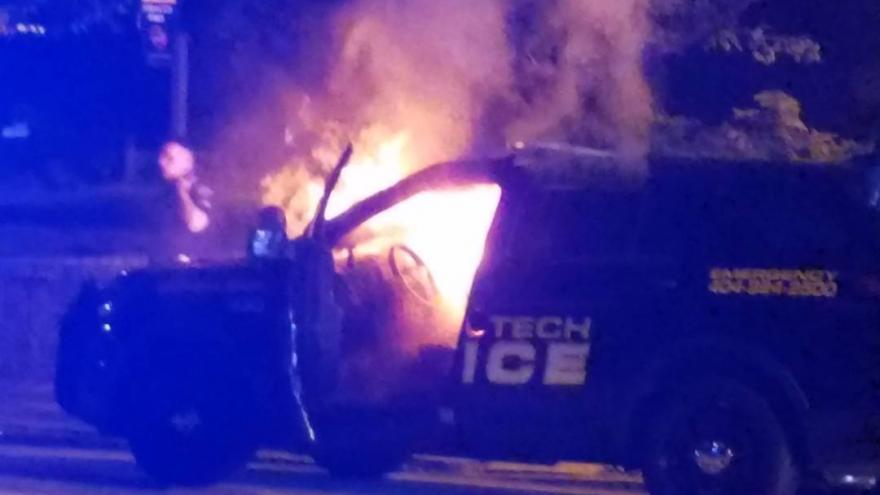 (CNN) -- Georgia Tech's campus didn't bear any scars Tuesday from a violent night that left a police vehicle torched and three people, at least one of them a student, in handcuffs.

The protest followed a candlelight memorial for Scout Schultz, a campus LGBTQ activist who was killed by police late Saturday. Officers say the student approached them with a knife and said, "Shoot me!" A family attorney says Schultz was suffering a "mental breakdown" at the time.

If anything, students told CNN, campus seemed quiet Tuesday. One student said it felt "a little tense." But it seemed like a normal day on an American campus.

A short walk from where the police SUV burned overnight, students in suits filed into the campus rec center for a career fair. A floor below them, classmates in workout clothes used strength machines and lifted medicine balls. Out front, students with noses in books and earbuds on sat under an awning waiting for the Tech Trolley.

Police officers were posted up at various points around campus, but students said it was nothing out of the ordinary.

Melissa Ruszczyk, 22, a first-year doctoral student in ocean science and engineering, sat in the shade doing schoolwork near the Kessler Campanile, a fountain where students had gathered on Monday night to quietly remember Schultz, before the protests erupted.

The native of western New York is new to campus, and she said the South's reputation for intolerance and conservatism leave her wary. As far as campus goes, "I feel as though, in general, it's a relatively safe community" -- but the fact that a campus police officer killed Schultz is "worrying," she said.

She was in her dorm doing homework Monday night when she got the public safety warning telling her to remain inside, so she didn't see the violent protest, but she feels tension on campus and is concerned by "the off-chance things escalate."

"I think the students -- at least myself, personally -- we're more vigilant at this point," she said.

Sitting under trees along the Tech Green, Zafir Sharif, a 19-year-old from Lawrenceville, Georgia, studying industrial engineering, said he hates that the protests turned violent and hopes it wasn't the work of Tech students. He said he had expected his fellow students to protest, but didn't think violence was "on the docket."

At least one of the three people arrested for the violent outburst overnight was a Tech student, identified as Cassandra Monden. The other two were Vincent Castillenti and Jacob Wilson, said university spokesman Lance Wallace. Castillenti is not a student, Wallace said. Officials are having difficulty confirming if Wilson attends Tech because he has such a common name.

All three are charged with inciting a riot and battery of an officer, he said.

Around campus, there were signs of support for the police force, such as the words "Love GTPD" spelled out with Post-it Notes in the window of a residence hall. A Go Fund Me established by the campus Marksmanship Club had raised almost $6,000 for the department and its two injured officers as of Tuesday afternoon.

"The outpouring of support from campus has been absolutely wonderful, and it's reassuring to know that we are not alone in having had universally good experiences with Georgia Tech Police," club vice president Rob Montgomery told CNN in an email.

Many students are still assessing the situation, and "what happened (to Schultz) is probably more complicated than what's being reported," said Sharif, a sophomore who also writes for the campus newspaper.

Sharif said that before Schultz's death, there hadn't been much tension between campus police and the student body, and that the police have been "focused on fostering a positive relationship" with students.

Officers had set up meet-and-greets on the Tech Walkway to introduce themselves, and Sharif knows students who have been stopped walking drunk on campus. Rather than treating them like criminals, officers gave them a ride to their dorms.

Still, police killing a student -- especially one as influential and as troubled as Schultz -- is hard to process, regardless of the reason, Sharif said.

"To a lot of students, that's going to be hard for them to forgive," he said.

About 20 minutes after a vigil for Schultz ended on Monday night, a group of about 50 people began marching toward police headquarters, roughly a 10-minute walk from the Kessler Campanile.

They chanted, "This is not OK" and "Justice now," before setting off fireworks, according to witnesses. One person jumped on the hood of a police car and smashed its windshield, said doctoral student Xincheng Shen, who attended the vigil.

Video posted to social media showed police handcuffing people, while protesters -- some of them covering their faces in bandannas -- confronted them. Other footage shows a police officer trying to extinguish a police SUV that's ablaze.

"I saw a couple of students forced to the ground handcuffed," Shen said.

The campus, meanwhile, received text and email alerts warning students to stay inside because of "violent protests on campus." They were instructed to avoid the area around the police station.

Family members described Schultz, a fourth-year studying computer engineering, as an excellent student. The president of the Georgia Tech Pride Alliance, Schultz identified as nonbinary and intersex, preferring the pronouns "they" and "them," and could often be found on campus promoting LGBT rights and causes.

On Tuesday, details were continuing to paint a picture of what led a campus officer -- identified by the Georgia Bureau of Investigation as Tyler Beck -- to shoot Schultz.

The GBI revealed it was Schultz who called police to the area, reporting an intoxicated white man possibly armed with a gun. A student began recording as police confronted Schultz outside a parking garage.

In the cell phone video, police can be heard repeatedly yelling at the 21-year-old to put down the knife and not to move. "Shoot me!" Schultz responds.

"Nobody wants to hurt you," says one officer. Another asks, "What's going on, man?"

Schultz appears to pause, then take three steps forward. Beck appears to fire once. Schultz screams and hits the ground. The student was reported dead at a hospital.

Three suicide notes were found in the student's dorm room. No gun was found at the scene and, despite initial claims from campus police that Schultz had a knife, the GBI said the only knife found at the scene was inside a multipurpose tool.

Family attorney L. Chris Stewart said Schultz was barefoot and "disoriented" and in the middle of a "mental breakdown." The lawyer accused Beck of overreacting.

"It's tragic that as Scout was battling mental health issues that pushed them to the edge of desperation, their life was taken with a bullet rather than saved with non-lethal force," Stewart said in a statement.

On campus, a purple candle burned on the sidewalk and flowers covered the ground beneath a tree outside the parking deck where Schultz was killed. A photo leaning against the tree shows an animated Schultz holding a rainbow flag aloft. A button pinned to one flower says "transgender students are welcome here."

Friends and students hung notes from the branches of a sapling anchoring the memorial.

"I wish I had told you how influential you are when I had the chance," said one of the notes, written on white paper.

"You were my best friend at Tech. Thank you for your kindness and love," read another. "The world lost a good one. I'll never forgive myself."

While most of the notes were anonymous, that one was signed, "With love, Sabrina."