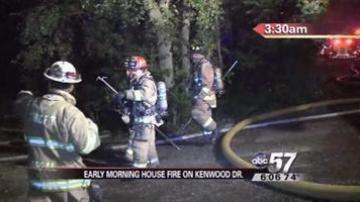 SOUTH BEND, Ind. -- A South Bend family is homeless after a fire tore through their home in the early morning hours on Tuesday.

The fire started around 3:30 p.m. on Kenwood Drive.

ABC 57 News was only television station on the scene, as several departments battled the flames.