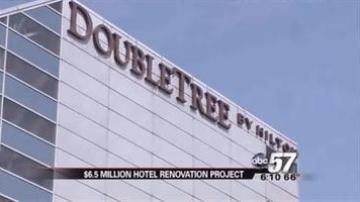 SOUTH BEND, Ind. -- A South Bend hotel is getting a big makeover!

On Tuesday, work began on the Double Tree by Hilton in downtown South Bend.

The City of South Bend is paying for the $6.5 million renovation project.

The manager told us that all of the guest rooms are being redone.

The hotel is also revamping the lobby, rec areas, and meeting rooms.

Right now, workers are focused on the atrium.

"It's our job to capture and maintain by customer service.  But it will basically, we think, and I think the downtown is under the same impression that it will help bring in more people downtown," said General Manager Chris Johnson.