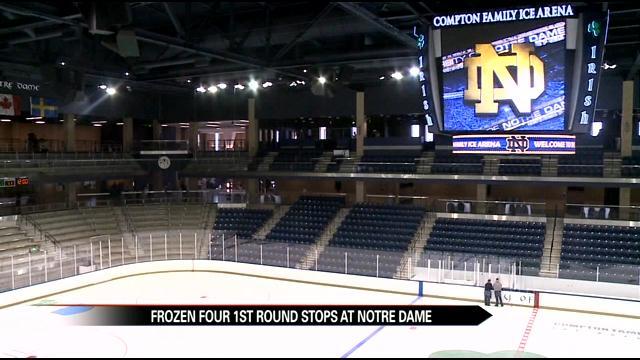 The road to NCAA hockey's Frozen Four makes a stop in South Bend.

It's your chance to catch some postseason hockey without having to travel too far.

The Midwest regional's for the Men's Frozen Four tournament are happening for the first time ever here in South bend.

The bracket was announced last week, and the city has been gearing up ever since.

Overall number one seed Minnesota State will take on Rochester Institute starting at 4 p.m Saturday. University of Nebraska-Omaha and Harvard will then take the ice on 7:30 the same day.

The winners of both contests will square off Sunday night for a “win-and-your-in” game to the Frozen Four in Boston.

Local commerce organization “Visit south Bend Mishawaka” is encouraging as many people to come out as possible to show America our city is a hockey town.

“We have these great teams coming to compete all for the chance to go to Boston and compete in the frozen four," says Lindsey Horner of Visit South Bend Mishawaka. "That's just great for us. It puts us on the map and we couldn't be happier about it.”

Coaches, players, families and fans from around the country will be taking part, and helping to fuel our economy in the process.

"Visit South Bend Mishawaka" says 800 rooms will be filled each night. The Fairfield inn and Morris inn are completely booked as of Friday morning.

All that money towards hotels and restaurants could boost the city's economy by more than $300,000, according to VSBM estimates. It's just another reason to make it out to Compton.

"Big names and big teams coming here," says Horner. "We're just going to see some great hockey and the community should be happy about that and go out and experience that too and go see top level hockey being played right here in our community."

You can be a part of the action by purchasing a ticket at UND.com