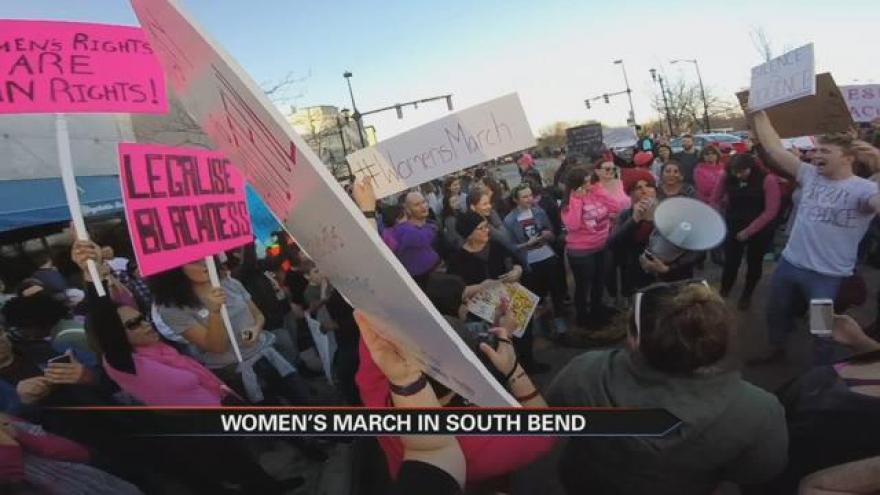 For those who couldn’t make it to Washington, D.C. for the Women’s March, South Bend hosted its own ‘sister march,’ along with more than 600 cities around the world.

South Bend Mayor Pete Buttigieg came out to the march to tell the crowd they’re definitely doing that.

“What happened yesterday in Washington was important, but what’s happening right now in South Bend and across the country is extraordinary,” said Mayor Pete.

The message is simple.

“I believe very strongly that words do matter-- I think when people say it doesn’t matter, they’re not telling the truth, and we’ve heard a lot of things that are not true lately,” said Chamberlain.

“I come from the age of the Cold War, and I thought that was over, but here it is again,” said one demonstrator, Russell Fages.

“I’m a mother, and I’m worried about my children’s future, so I’m out here for women’s rights, and black women’s rights,” said another demonstrator Danica Kulemeka.

“I think that the march out here today says that there’s a big issue here, and that we’re all here to support the change and that it needs to change,” said Notre Dame student, Sara Berumen.

They hope their representatives heed their call for change.

“I hope that people who represent us, our senators and our representatives hear us and know that we won’t be silent,” said Chamberlain.

They’ll continue speaking out as they march out of love for all people.