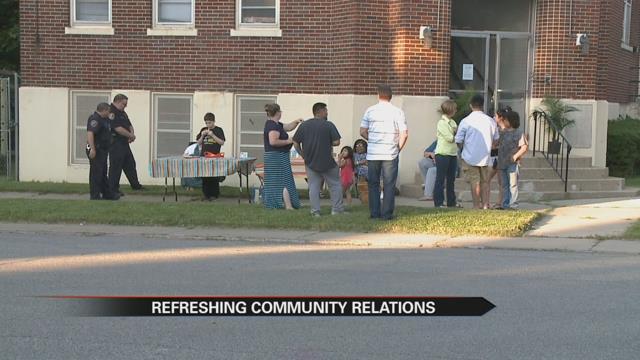 The Monroe Park neighborhood in South Bend is turning lemons in to lemonade.

The 500 block of Carroll Street hosted a free lemonade stand Friday night in an effort to bring neighbors together to prevent crime.

Residents of the area say they're sick of it having a reputation for crime.

They are trying to come together to show everyone what their neighborhood has to offer, starting with the lemonade stand.

Gil Michel has been the pastor of a church in the neighborhood and a resident himself for 15 years.

He says he's seen plenty of crime during his time there.

“I do get afraid sometimes,” Perkins said.

The neighborhood is surveyed by South Bend Police often.

They even use the Armadillo truck in the area to prevent crime.

“I think many of us know the beat officers by name,” Michel said.

The crime inspired neighbors to host a free lemonade stand to bring everyone together to discuss safety and get to know one another.

Many South Bend police officers were in attendance as well.

“We want a safe neighborhood and we're actually in the majority,” Michel said.

Despite crime, neighbors insist it is a great place to live, and they want to make it even better.

“This is a great, great neighborhood. We have the potential to do a lot of things,” Perkins said.

According to residents, the lemonade stand is just the beginning of neighborhood bonding.

“That's the whole statement of the lemonade stand, to bring an old fashioned neighborhood concept to a present-day reality,” Michel said.