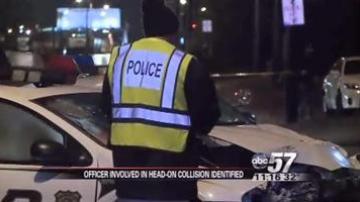 SOUTH BEND, Ind. -- A South Bend police officer who was hit head-on in police cruiser is back home.  The collision happened Wednesday on Sample Street.

27-year-old Patrolman Anthony Dertz was heading west on Sample to a call.  33-year-old  Walter Smith was heading east.  Smith pulled in front of Dertz, making a left turn onto Arnold Street. He cut off the officer and creating a head-on collision.

Smith is in custody and admitted that he had been drinking.  Police say that alcohol was a factor in this collision.  They say that the other driver ran away from the scene of the crash.  Officers caught up with him about 10 minutes later.

Officer Dertz was taken to Memorial Hospital for treatment.  He was released on Thursday.

Officer Dertz has worked with the South Bend Police Department for 16 months.