South Bend teacher was at Ft. Lauderdale airport during shooting 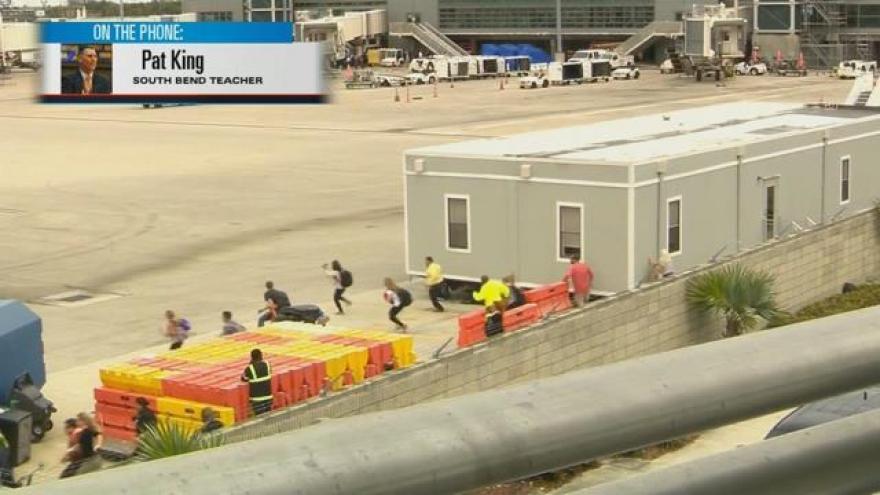 A Washington High School teacher and his wife were at the Fort Lauderdale airport when the shooting happened Friday afternoon.

Pat King teaches at Washington High School and is a basketball coach at Holy Cross College.

King said he was watching television around 1 p.m. and learned of the shooting.

"I said, 'Look there's a shooting at the airport.' And everyone got quiet and listened and we watched. They didn't have sound on speakers but we found out it was Delta terminal two, which was right next to us," King said. "I was two minutes from boarding the plane and they suspended us so we went to sit down  then they got on and said the FAA shut the whole airport down and I would say within five minutes TSA came running through our terminal from the security area where we were yelling, "Everybody down! Everybody down! A gunman!" And it got crazy from there. I mean it looked just like what you see on TV with people hitting the deck."

From there, King said he escaped through a door to the runway. They were one of the first groups to evacuate.
"Two guys came by with guns with them semi-automatic assault rifles and we got checked, almost like airport security, real quick frisk. Then they said, 'Crawl under the railroad cars.' I'm not sure if they are still doing that but we were the first ten people to actually crawl under the cars, went across the tracks, now we are just hanging out."

The suspected shooter was identified as Esteban Santiago through a military ID he had on him. He surrendered without a fight.

Investigators say he traveled from Anchorage, Alaska to Minneapolis, then flew to Fort Lauderdale.

Five people were killed and eight were injured in the shooting, according to the latest reports.