South Bend turbine set to be turned on 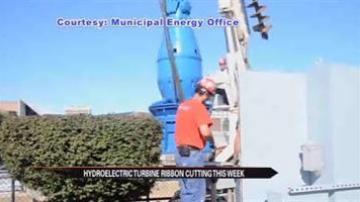 SOUTH BEND, Ind. -- In honor of South Bend's Energy Week, the city is holding a ribbon-cutting ceremony, at the hydro-electric turbine Wednesday.

The city is about three weeks away from feeling the benefits of water power as a hydro-electric turbine is set to be turned.

The turbine was installed in August along the St. Joseph River.

It was bought by the city back in the 1980s but was never installed. The turbine was originally part of the plan for the fish ladder along the East Race.

At least check, crews had to do some electricity work to connect the energy to Howard Park where the turbine's power will be used.

The ceremony starts at 11 a.m. along the river on Washington Street.