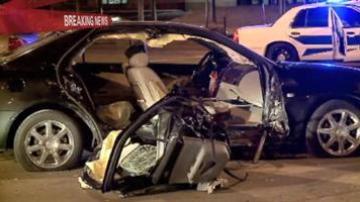 INDIANAPOLIS, Ind. -- A state representative and his daughter were injured in a two-car crash in downtown Indianapolis Thursday evening around 7 p.m.

WRTV-6 says it took crews about 15 minutes just to get Niezgodski’s daughter Rachael out of the car.

The female driver of the Kia was not injured, but Niezgodksi and his daughter were taken to the hospital in critical condition.

Our reporting partners say Niezgodksi is shaken up and injured but ok. Police continue to investigate and say there were no signs of impairment.

On Niezgoski’s official Facebook page- constituents, friends and family are sending their thoughts and prayers- and hoping both father and daughter make a full recovery.

Niezgodski is a democrat and life long resident South Bend. He also owns his own plumbing company in town and served on the County Commissioners and the County Council.

“I want to say how deeply moved our family has been by the outpouring of support we have received since last night’s accident. The numbers of prayers and messages have been greatly appreciated by myself, my daughter and the rest of our family.

“I also must pay tribute to the police officers, firefighters and EMTs who responded so quickly to the scene, as well as the folks at Eskenazi Hospital who treated us. I always have believed that those men and women who devote themselves to public safety never get enough credit for the work they do to protect the rest of us, and the skill and expertise they bring to the table came to the forefront last night. For that, I will be eternally grateful.

“My daughter Rachael was released from  the hospital last night. She suffered a concussion and some soft tissue damage, but considering the scope of the accident, we are all incredibly grateful that was the extent of her injuries.

“I suffered a broken rib,  and the accident aggravated some neck problems I have had for several years. I am expected to be released sometime today, with some follow-up treatment scheduled for Monday.

“At times like this, it is valuable to count one’s blessings. Thanks in no small part to the work of many, many dedicated servants, my daughter and I are alive today. We thank them, and we thank all of you who have shown us so much support over these past few hours. You all occupy a special place in our hearts.”